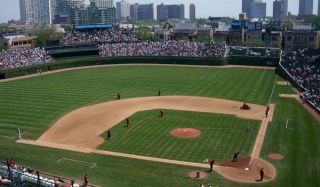 Ask most fans of the Cubbies the question, "Are the Chicago Cubs really cursed?" and a good number will shout out, "YES!"

Can you blame them? The Cubs haven't won a World Series in 102 years. They're the lovable losers, a team whose championship futility has become as much a part of the franchise's identity as the ivy climbing the walls of the outfield at Wrigley Field.

The 2010 Cubs failed to make the playoffs, ensuring another year without a World Series appearance, and guaranteeing that the legendary Curse of the Billy Goat endures for at least one more season.

What, you don't know about the Cubbies' curse?

The curse is cast

Legend has it that so-called Curse has its origins in the 1945 World Series. According to Mickey Bradley, co-author of "Haunted Baseball" (The Lyons Press, 2007), a book about the spooky relationship between baseball and the paranormal, it all began on Oct. 6, 1945 at Wrigley Field during Game 4 of the Fall Classic.

That day, Billy Sianis, owner of the nearby Billy Goat Tavern, attended the game with his pet goat. At first, he was refused entry but, according to Bradley and other accounts, because he had a ticket for the goat, the ushers relented.

Then it rained. The odor from the soggy animal began getting the 'goat' of nearby fans, and security booted Sianis and the goat.

Angered over what he felt was shabby treatment, Sianis reportedly cursed the Cubs outside the stadium. In his book "Da Curse of the Billy Goat, The Cubs, Pennant Races, and Curses" (Protar House LLC, 2004), author Steve Gatto writes that Sianis' family insists the tavern owner issued his curse via telegram to the team's owner, P.K. Wrigley, declaring that, "You are going to lose this World Series...You are never going to win the World Series again because you insulted my goat."

The Cubs haven't been back to the World Series since.

The Curse of the Billy Goat has become an urban legend rivaling that of the alligators in the New York City sewers and Bigfoot. But the question remains: Are the Cubs really cursed?

It may depend on one's perspective.

"Curses are as powerful as people's belief in them," Bradley said. If players start believing such circumstances as a curse are preventing them from achieving success, "it can become a self-fulfilling prophecy."

It's easy to overlook the injuries, bad player signings, sub-par pitching and erratic defense that often determine whether a team wins or loses in baseball. Sometimes, you want to blame extraneous factors for the rotten luck. Why not blame a Billy Goat?

It's also hard to argue with more than a century's worth of losing, often in circumstances that can challenge even the most disbelieving fan's resolve. The evidence certainly supports those who believe the Sianis curse is real.

In 1969, a promising season ended with a late-season collapse that longtime Cubs fans blame on a September game at Shea Stadium. In that game, a black cat ran onto the field and circled Cubs third baseman Ron Santo. The Cubs lost that game to the Mets and eventually collapsed and missed the playoffs.

In 1984, the Cubs won their first title of any kind since '1945 when they captured the NL Eastern Division. Needing just one win in the NL Championship Series over the San Diego Padres to return to the World Series, the Cubs proceeded to lose three straight games. The most crushing moment: First baseman Leon Durham's 7th-inning error in the deciding Game 5.

But it was the heartbreak of 2003 that supporters of the curse point to as Exhibit A in their case.

That was the year the Cubs, up 3 games to 2 and just five outs away from returning to the World Series for the first time in 58 years, added the 'Steve Bartman incident' to their history of misery.

Bartman, a Cubs fan now-infamously sat in Aisle 4, Row 8, Seat 113 at Wrigley Field for Game 6 of the National League Championship Series, and prevented Cubs outfielder Moises Alou from most likely catching a foul ball that drifted just over the outfield wall when he did what so many fans do at the ballpark: try to grab a souvenir foul ball.

That would have been the second out of the inning. Alas, the inning continued and the Marlins erupted for eight runs, to rally and win. Florida won Game 7 and went on to win the World Series that year.

Steve Bartman was ostracized, even threatened, for what some fans felt was an inexcusable act. His unfortunate action that night continues to resonate seven years later; ESPN is even producing a documentary called "Steve Bartman: Catching Hell."

"It's a natural human compulsion to look for explanations and patterns in odd occurrences," Bradley said. "The team has not been to the World Series since Sianis 'cursed' them; they have not won a World Series in more than 100 years."

Some Cubs fans may also put stock in the curse because it reaffirms their support of their ballclub. Being a fan of a team known for pulling defeat from the jaws of victory takes a certain amount of character. For the Cubs faithful, believing in the curse is like a badge of honor.

As someone told Bradley, "Anyone can win the World Series, but it takes a special team to lose for 100 years!"