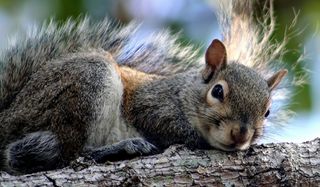 The sight of squirrels vivaciously chasing each other across a park lawn or spiraling down a tree trunk is one that everyone is familiar with. But why do they do it?

There are several reasons why squirrels "play tag," and a lot depends on the age and the sex of the squirrels in question.

In adult squirrels, chasing is most often related to establishing or maintaining dominance, which is how they settle territorial disputes, according to John L. Koprowski, a squirrel expert and professor of wildlife conservation and management at the University of Arizona.

Squirrels will chase or nip at other squirrels that are feeding in their territory, Koprowski said. The up-and-down spiraling pattern around a tree displayed during some chases is a sure sign of a territorial dispute.

Many species of squirrels are territorial, including northern flying squirrels (Glaucomys sabrinus) and American red squirrels (Tamiasciurus hudsonicus). However, other species, such as the fox squirrel (Sciurus niger), are not. Grey squirrels (Sciurus carolinensis), which are among the most common squirrels in the United States, are not territorial, but they also use chasing as a way to show other squirrels who's the boss.

"Eastern gray squirrels are not territorial but do form dominance hierarchies in which they establish dominance over each other," said Michael Steele of Wilkes University in Pennsylvania, who has studied squirrel behavior. "Establishing dominance involves aggression and chasing."

Another form of chasing, although in a different pattern, takes place in the late winter or very early spring, when adult squirrels start looking for a mate. The males chase females as part of the mating process, using a slow-paced, following technique during which they use scent to assess the female's reproductive state, according to Koprowski.

The final kind of chasing behavior is seen in young squirrels, who happily chase each other around in the same way that puppies and kittens "play act" fighting, Koprowski told Life's Little Mysteries.

"Juvenile squirrels chase for much more playful reasons and will chase each other or their motherfather's don't provide care or assist in raising young in any wayas they try to develop coordination, strength, and skills...and perhaps just for fun!"