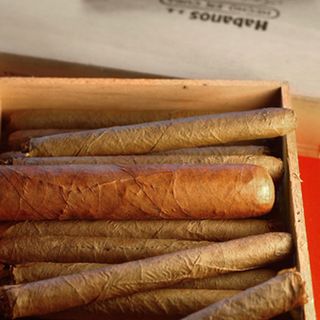 The death of renowned Cuban cigar maker Alejandro Robaina has sent tobacco enthusiasts around the world into mourning. But skilled as Robaina was, it was hardly his work alone that garnered Cuban cigars' reputation as the best in the world. In fact, that reputation dates back to at least the 1600s, and has endured thanks to a combination of geography, skill, and a good deal of hype.

Cuba has what some see as the perfect environment for growing cigar tobacco. The island's soil allows the plants to produce very high quality leaves, said Alan Dye, a professor of economics at Columbia University who specializes in Cuban studies. In particular, the tobacco leaves used for the wrappers, considered the most important part of the cigar, attain an exceptionally perfect form in Cuba, he told Life's Little Mysteries.

The weather is also important. The humidity on the island is ideal for both the growing and drying of the plants, said Robin Derby, an assistant professor of Latin American history at the University of California, Los Angeles, who researches Cuban cigar culture.

In addition to the environmental factors, Cubans have hundreds of years of experience with the crop, providing them with highly refined timetables for harvest and rolling techniques.

"It's the skill of the picking, you have to know when to pick them at the right time," said Derby. "And you have to have the proper humidity. Cigar leaves have to be intact, and very large."

However, Derby cautioned that the allure of Cuban cigars results from mythology as much as geography. She notes that early legends attributed the high quality of Cuban cigars to the fact that they were rolled in the laps of biracial Cuban women.

More recently, the U.S. trade embargo against Cuba has added excitement to smoking them, said Derby. The embargo also drastically raised the price of Cuban cigars. And in the world of conspicuous consumption, where people pay $500 for a box of Alejandro Robaina's cigars, price and quality are one and the same.