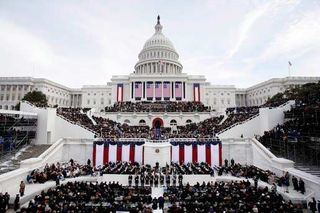 A choice few inaugural speeches are remembered in the annals of history, some for particularly stirring turns of phrase and others for striking just the right note for the nation at the time.

Others are totally forgotten, or at best remembered for how bad they were. These worst inaugural addresses in U.S. presidential history represent a laundry list of what not to do on your big day, from boring the crowd with administrative details to droning on for two hours in the bitter cold, ultimately killing yourself in the process. They may serve as lessons for President-elect Barack Obama's talented speechwriters in the run-up to his address Jan. 20. Warren Harding — 1921 His maligned inaugural address was a sign of things to come for Warren Harding, who was dogged by scandals in his cabinet, became famous for odd speech patterns and finally died of a heart attack while still in office in 1923. More boring than brilliant, his 1921 address spoke, at length, of his ideologies: "I speak for administrative efficiency, for lightened tax burdens, for sound commercial practices, for adequate credit facilities, for sympathetic concern for all agricultural problems, for the omission of unnecessary interference of Government with business, for an end to Government's experiment in business, and for more efficient business in Government administration." Thomas Jefferson — 1805 After a soaring first address in 1801, Thomas Jefferson was reelected and offered a sophomore effort that was an angry, monotone dud, historians say. Bitter at the "licentious" media and four years of attacks on his administration, the president was on the defensive and not as his inspirational best: "During this course of administration, and in order to disturb it, the artillery of the press has been leveled against us, charged with whatsoever its licentiousness could devise or dare. These abuses of an institution so important to freedom and science, are deeply to be regretted, inasmuch as they tend to lessen its usefulness, and to sap its safety; they might, indeed, have been corrected by the wholesome punishments reserved and provided by the laws of the several States against falsehood and defamation; but public duties more urgent press on the time of public servants, and the offenders have therefore been left to find their punishment in the public indignation." Ulysses S. Grant — 1869 It would have been a tough act to follow for anyone, but Ulysses S. Grant — speaking on the inaugural podium just four years after Lincoln's famous address — still squandered his opportunity, most historians agree. At a time when the government should have been celebrating the passage of a few years of peace, the Civil War hero chose a strictly business tone, musing about the nation's debts and laws: "To protect the national honor, every dollar of Government indebtedness should be paid in gold, unless otherwise expressly stipulated in the contract. Let it be understood that no repudiator of one farthing of our public debt will be trusted in public place, and it will go far toward strengthening a credit which ought to be the best in the world, and will ultimately enable us to replace the debt with bonds bearing less interest than we now pay." James Buchanan — 1857

One of the worst speeches of all time was doled out by one of the worst presidents, according to historians. With the United States already on the road to civil war, a "clueless" James Buchanan essentially ignored the impending conflict, downplayed the growing rifts between North and South over slavery and urged Americans to focus on more important matters: "May we not, then, hope that the long agitation on this subject is approaching its end… Most happy will it be for the country when the public mind shall be diverted from this question to others of more pressing and practical importance." William Henry Harrison — 1841

At more than 8,000 words, the address of distinguished military vet William Henry Harrison was and still is the longest in inaugural history by a comfortable margin. It took two hours to deliver in a snowstorm, boring the crowd and possibly even killing Harrison, who wore no overcoat and contracted pneumonia soon after. He ended his address on this note and died a month into office: "Fellow-citizens, being fully invested with that high office to which the partiality of my countrymen has called me, I now take an affectionate leave of you. You will bear with you to your homes the remembrance of the pledge I have this day given to discharge all the high duties of my exalted station according to the best of my ability, and I shall enter upon their performance with entire confidence in the support of a just and generous people."