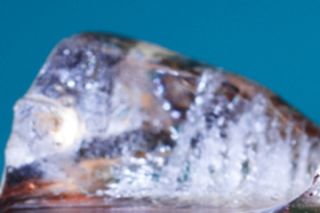 Ice gets cloud during the freezing process because of how it freezes.
(Image: © Ice image via Shutterstock)

Curious children, and adults with lots of free time on their hands, often notice that apparently clear water sometimes produces oddly clouded ice cubes. The main reason is that the (hopefully) crystal-clear water you pour into the ice trays is not as pure as it seems, containing small amounts of (hopefully) harmless suspended minerals and sediment.

Because all objects freeze from the outside in, the center of the cube is the last to solidify. Water free of minerals and impurities freezes first, pushing the cloudy parts containing the sediment (and tiny trapped air bubbles) toward the center. The result is a harmless (but not particularly photogenic) ice cube clouding.

Not only do ice cubes cloud in the freezer, but they also shrink noticeably after about a week or two due to sublimation, the term used for evaporation directly from the solid to gas phase.