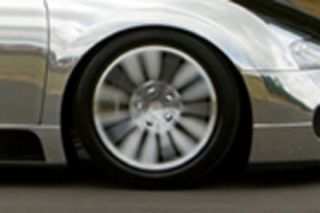 An illusion makes a wheel seem to spin backward, but scientists can't agree on why.
(Image: © Dreamstime | Christoff.)

You can learn more about this from Hollywood than the Halls of Science.

In movies, a wheel spinning onscreen may appear to rotate slowly in the wrong direction. This is because movie cameras capture still images of a scene at a finite rate (usually 24 frames per second) and the brain fills in the gaps between these images by creating the illusion of continuous motion between the similar frames. If the wheel rotates most of the way around between one frame and the next, the most obvious direction of motion for the brain to pick up on is backwards, since this direction suggests the minimal difference between the two frames.

But the "wagon-wheel" phenomenon isn't just limited to Clint Eastwood flicks. People experience the effect in real life, even in continuous light. This cannot be explained by stroboscopic or filmic factors. Two competing theories are currently rolling around the academic journals for acceptance.

One proposes that the visual cortex, much like a movie camera, processes perceptual input in temporal packets, taking a series of snapshots and then creating a continuous scene. Perhaps our brain processes these still images as it does frames in a movie, and our perceptual mistake results from a limited frame rate.

While some form of temporal parcing certainly occurs in the brain, it isn't clear that this is sufficient to explain the wagon-wheel effect in continuous light.

One key experiment shows that two identical, adjacent spinning wheels are reported by subjects as switching direction independantly of each other. According to the movie-camera theory, the two wheels should not behave differently, since the frame rate is the same for everything in the visual field.

This has led some scientists to a theory that explains the effect as a result of perceptual rivalry, which occurs when the brain creates two different interpretations to explain an ambiguous scene.

Those interpretations then vie for attention from higher-order brain processes that determine, ultimately, how we see the world. A similar example of this is the Necker cube, a two-dimensional cube that "pops" back and forth between two three-dimensional visualisations.