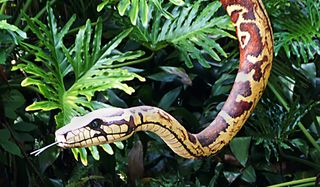 With the exception of a few species that have adapted to daytime hunting, most snakes do not see well. Generally they can see shapes but not details.

This poor eyesight probably owes to their evolutionary history as burrowers, living in the dark where eyes weren't much use.

Snakes called pit vipers can see well at night by an amazing trick. Their pits (one on each side of the head) sense heat (infrared light) like night vision goggles. These pits, not eyes, actually are thought to render images of prey in the snakes' brains.

Interestingly, Cobras' senses are sharp enough to aim for the eyes when spitting venom. They know, apparently, that the venom will blind a human or other foe.