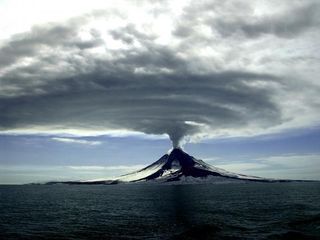 The Alaska Volcano Observatory on April 1 celebrated 25 years of monitoring and studying Alaska's resplendent volcanoes. To celebrate with them, we bring you this stunning image from 2006, when the observatory caught the Augustine volcano blowing its lid.

The Augustine volcano is 4,134 feet (1,260 meters) tall and its last eruption was from December 2005 to March 2006. The observatory first noticed the eruption was imminent when they detected so-called micro-earthquakes, tiny earthquakes that suggest a volcanic eruption could possibly occur.The volcano then erupted explosively in January 2006, with ash columns rising some 9 miles (14 kilometers) above sea level. Eruptions and ash columns continued in to March.

Alaska's biggest volcano threat, as the above image shows, is airborne ash that endangers aircraft flying between North America and Asia. Volcanoes near towns and cities are also a threat because of ash fall, lahars and other rapidly flowing mixtures of hot rock fragments, fluids and gases.

The Alaska Volcano Observatory issues daily and weekly updates of volcanic activity in Alaska on its website and on Twitter @alaska_avo.