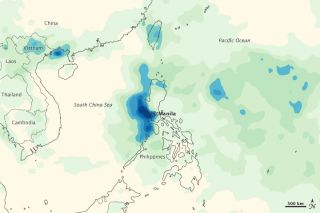 Satellite data was used to make this color-coded estimation of monsoon rain that has fallen over the Philippines from July 25 to Aug. 9. The heaviest rainfall
(Image: © NASA)

In recent weeks, the northern Philippines, including the city of Manila, have suffered under a deluge of rain brought on by the seasonal monsoon. NASA satellites measured just how much rain the area was seeing from its perch in orbit.

A color-coded image made with satellite data shows rainfall totals in the Philippines and the surrounding region from July 25 to Aug. 9. The heaviest rainfall — more than 35 inches (900 millimeters) — appears in dark blue, while the lightest rainfall — less than 4 inches (100 mm) — appears in light green. Trace amounts of rain appear in yellow. The heaviest rainfall is concentrated immediately west of the northern Philippines with some extending into Manila, NASA said in a release.

The method for estimating rainfall looks over a large area and can miss smaller pockets of heavy rain, the release noted.

The monsoon rains and the floods they created came just after Typhoon Saola barreled through the region before making landfall in China. Saola claimed dozens of lives in the Philippines, NASA said. The Philippine Star reported that the monsoon floods, which reached neck-deep in some places, had caused 65 deaths as of Aug. 11 and displaced some 600,000 people.

Forecasts have called for more rain in the coming days, as rescue operations around Manila continue.