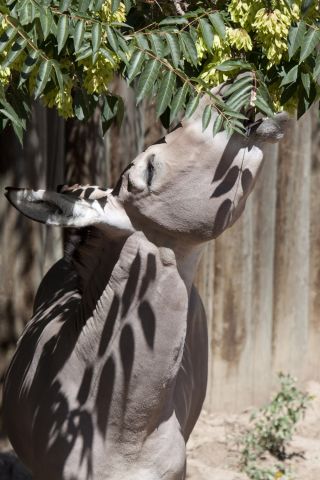 A brand new species to the Denver Zoo, the Somali wild ass, is on display for visitors.

Two males named Kalifa and Kamowa, just arrived from the San Diego Wild Animal Park. The two half-brothers share the same father. Kalifa, the oldest brother, was born in San Diego in July 2008. Kamowa followed in February 2009. Somali wild asses are smaller than most members of the equid family, which includes horses, zebras and asses. They only stand about 4 feet (1.2 meters) tall at the shoulder and weigh about 600 pounds (270 kilograms). They have grey coats and white bellies, but their legs have distinctive horizontal stripes. Their narrow hooves help them negotiate rocky terrain. This species is found in the arid grasslands, rocky hills and semi-deserts of northern Ethiopia and Somalia. Even though they can go without water longer than other equids, given their hot environment, they usually don't stray more than 20 miles (30 kilometers) from water.

With a wild population of less than 1,000 individuals, the International Union for Conservation of Nature (IUCN) classifies this species as critically endangered. Their biggest threats are being hunted for food and traditional medicine, habitat destruction for agriculture and competition for food and water with domestic livestock. Somali wild asses have local connections as well. The Spanish brought African wild asses to North America in the 1500s. Their descendants are the wild burros found in the southwestern United States.