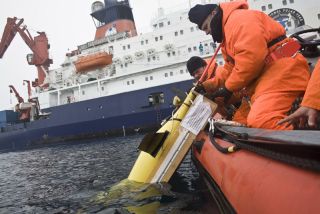 With the massive Polarstern in the background, a free-swimming glider is put into the water to take oceanographic measurements.
(Image: © A. Beszczynska-Möller, Alfred Wegener Institute.)

The German icebreaker Polarstern, a massive floating laboratory and a workhorse of polar research, is headed toward Arctic waters that play a key role in the way climate change affects the world's oceans, in particular sensitive far north regions.

The research vessel weighed anchor on June 14, and left the northern German city of Bremerhaven with 44 scientists on board.

The international team of researchers is sailing for the Fram Strait, a strip of ocean that lies between Greenland and Norway's Spitsbergen Island. The strait is the only deep-sea connection between the Atlantic Ocean and the Arctic Ocean, and serves as a conduit for ocean waters that move between the southerly ocean and its northern neighbor.

The expedition is slated to take reams of data on temperature, salinity and oxygen levels in the waters that pass through Fram Strait in hopes of better understanding how these factors are correlated with ocean circulation in the region.

"The aim of our research is to quantify the water masses and heat exchange between the North Polar Sea and the Northern Atlantic and circulation in the Fram Strait," Agnieszka Beszczynska-Möller, an oceanographer at the Alfred Wegener Institute for Polar and Marine Research, said in a statement.

The interplay between temperature, salt and oxygen and the ocean's large-scale movements appears to play a key role in the health of Arctic sea ice, which has undergone steep declines in recent decades. And changes in sea ice can have far-reaching effects.

The Polar Regions are a principal player in global ocean circulation. Warm, salty surface waters flow northward from the Atlantic toward the Arctic, while deep, frigid and lower-saline waters move south, creeping into the world's other ocean basins. Global warming appears to be changing this large-scale exchange.

The Polarstern has been conducting research on conditions in the Fram Strait for the last 15 years. During this trip, scientists will use free-swimming robots that are guided by satellites to gather data, as well as sensors that are tethered to the ocean bottom and float at various depths above the seafloor.

The Fram Strait leg of the expedition wraps up on July 15, after which the expedition will turn its attention to studying the deep-sea biology of Arctic waters. The Polarstern is scheduled to return to Germany in October, and will head to Antarctic waters soon after, just in time for austral summer.