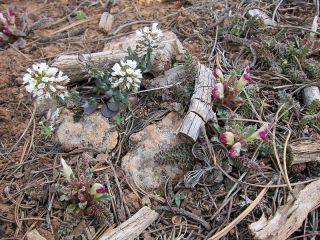 Two flowers that have bloomed along the South Rim of the Grand Canyon are (left) Fendler's pennycress or wild candytuft and (right) dwarf lousewort or wood-betony.
(Image: © NPS, Michael Quinn)

From blankets of pollen to terrifying twisters, the signs of spring are popping up all over the United States, and the Grand Canyon is no exception.

Along the South Rim of the canyon, two of the first flowers to appear are Fendler's pennycress or wild candytuft (Noccaea montana) and dwarf lousewort or wood-betony (Pedicularis centranthera). These flowers are seen in the image above at left and right, respectively.

Both plants often flower as the snow is still melting in both ponderosa pine forests and pinyon-juniper woodlands, according to a National Park Service statement. Both plants are common to the park and are also found on the North Rim of the canyon.

There are approximately 1,737 known species of vascular plants (like trees and flowers), 167 species of fungi, 64 species of moss and 195 species of lichen found in Grand Canyon National Park. The 8,000-foot elevation change from the river up to the highest point on the North Rim of the canyon creates a wide variety of ecosystems that account for the commensurate variety of plants, according to the NPS.