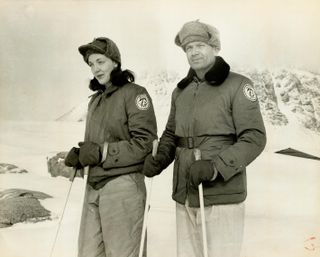 Jackie Ronne and her husband Finn on skis in Antarctica during an expedition from 1946-1948.
(Image: © Ronne Antarctic Research Expedition)

Men tend to dominant the historic tales of adventurous daring-do and new places discovered, as the traditional position of women kept them out of the exploration business. But many of women have bucked that trend, and OurAmazingPlanet wants to give them their due.

From polar extremes to the depths of the oceans, women explorers have been charting new territory all around the world. Here are seven women who have changed the world and shattered glass ceilings for all explorers.

Arnesen is a Norwegian explorer who made international headlines when she became the first woman to ski solo to the South Polein 1994 — a 50-day expedition of 745 miles (1,200 kilometers). Together with explorer Ann Bancroft, she is organizing an international expedition team of six women, from six continents, on an 800-mile (1,300-km), 80-day long expedition to the South Pole in November 2012. They dedicated the new adventure to the issue of international access to clean water. [Their website: YourExpedition.com]

In 1975, Tabei became the first woman to summit Everest. She was an avid mountain-climber in Japan when the Yomiuri newspaper sent an all-woman team to Nepal to take on the challenge of climbing the world's highest peak. Fifteen women were selected out of hundreds of applicants.

As the day grew closer, tragedy struck the group when the women were camping at an altitude of 6,300 meters and an avalanche struck the team's camp. Tabei lost consciousness for six minutes until her Sherpa guide dug her out.

Twelve days after the avalanche, she became the first woman to summit Everest, taking the same route as Sir Edmund Hillary and Tenzing Norgay in 1953. While Tabei has slowed her climbing with age, her goal is to climb the highest peak in every country in the world. She is the director of Himalayan Adventure Trust of Japan, an organization working on a global level to preserve mountain environments.

Earle is an oceanographer with an explorer's heart. Since 1995 she has been a National Geographic explorer-in-residence, sometimes called "Her Deepness" or "The Sturgeon General." Earle has led more than 60 expeditions worldwide involving in excess of 7,000 hours underwater in connection with her research.

She holds the recordfor the deepest women's solo free dive(going down to 3,281 feet (1 km). In 1979, she made an open-ocean dive in a special pressurized suit to the sea floor near Oahu, setting a women's depth recordof 1,250 feet (0.4 km). At the bottom, she detached from the vessel and explored the depths for 2.5 hours with only a communication line connecting her to the submersible, and nothing at all connecting her to the world above. [In Images: Sylvia Earle's 'Searching for Wisdom' Expedition]

Although most people think of Sally Ride when they think of women in space, Russian Valentina Tereshkova was, in fact, the first female to fly. She was selected out of more than four hundred applicants, then five finalists, to pilot the Vostok 6 on June 16, 1963, becoming the first woman — and the first civilian — in space.

During her three-day mission, she performed various tests on herself to collect data on the female body's reaction to spaceflight. Before being recruited as a cosmonaut, Tereshkova was a textile-factory assembly worker and an amateur parachutist.

After the dissolution of the first group of female cosmonauts in 1969, she became a prominent member of the Communist Party of the Soviet Union, holding various political offices. After the collapse of the Soviet Union, she stayed in politics and remains revered as a hero in post-Soviet Russia.

Ronne's goal for the expedition was to write her adventures for the North American Newspaper Alliance and the New York Times. Often remembered as "Antarctica's First Lady," Ronne had a history degree from George Washington University that provided her with the skills to chronicle the adventures she shared with the expedition team during their "winter over."

Van Dover had an early fascination with Jules Verne's Captain Nemo character from the "20,000 Leagues Under the Sea" while growing up on the New Jersey shore chasing crabs. Her love of exploration and the oceans led her to oceanography, with academic adventures in ecology and invertebrate zoology.

Her work deals with the ecology of deep sea vent communities — not quite 20,000 leagues under the sea, but just about as close as an explorer can get on this planet.

Cindy was the first female pilot of Alvin, a deep-diving submersible. She has led 48 Alvin expeditions, which have led to the discovery of many new species and strange ecological relationships within the deep sea vent assemblages of mussels, shrimps, tube worms and bacteria.