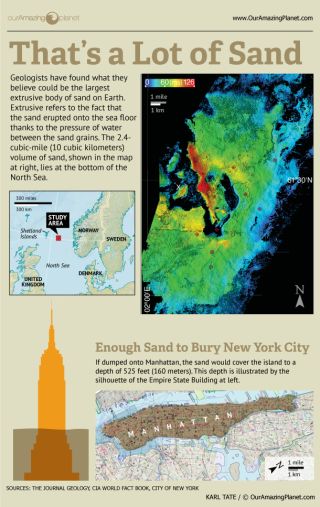 The Earth's largest sandmass was discovered beneath the North Sea. This graphic shows how much of the Empire State Building it would cover.
(Image: © OurAmazingPlanet)

A giant mass of sand large enough to bury all of Manhattan under dunes more than 50 stories tall apparently erupted from the floor of the North Sea hundreds of thousands of years ago, the largest such body of sand ever found in the world, researchers say.

Scientists used 3D seismic data and samples drilled from the ocean bottom during fossil fuel exploration to analyze a huge body of sand that lies over an oil field in the North Sea. Their research suggested it was "extrusive," spewed out from fissures in the seafloor likely over the course of years sometime between 400,000 and 2.6 million years ago.

"Most exciting is discovering things for the first time and realizing that you have discovered something new," researcher Helge Løseth, a geologist at the Statoil Research Center in Trondheim, Norway, told OurAmazingPlanet. [Gallery: One-of-a-Kind Places on Earth]

Løseth explained that under the surface of the seafloor, porous sands are covered with impermeable clays. The water pressure between the sand grains can increase enough to fracture the overlying clays, and this pressurized sandy water will then erupt upward.

"This is similar to when you increase the water pressure in one end of your garden hose by turning the tap," Løseth said.

Aside from being interesting for its size, this body of sand might have economic value as well. The pores between sand grains are normally filled with water, but hydrocarbons such as oil or gas can migrate into these pores instead.

"Such big sands are so large that they can contain economically interesting volumes of hydrocarbons," Løseth said. "Today, at the depth they are placed in the North Sea, they may also be interesting for carbon dioxide storage."

Løseth and his colleagues Nuno Rodrigues and Peter Cobbold detailed their findings online March 19 in the journal Geology.