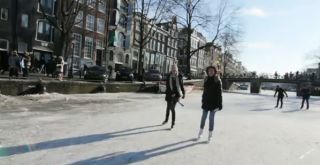 For the second time in three years, Amsterdam's famous canals have frozen. You know what that means? It's time to lace up the ice skates.

After temperatures dropped to 14 degrees Fahrenheit (minus 10 degrees Celsius) this past weekend, Dutch young and old flocked to the city's famous waterways, gliding across the frozen surfaces on ice skates. The canals also froze in 2010, which was the first time it happened in more than a decade. When this year's freeze was imminent, Dutch authorities closed the canals to motorized traffic, quickening the freeze. A video of the action shows one of the few bright spots in an otherwise brutal European winter. Across the continent, hundreds have died from exposure to the cold.

Amsterdam's frozen canals are the latest European waterway to freeze this winter. Earlier this month, Venice's famous canals froze, a rare feat. Europe's second-longest river, the Danube, has also frozen. At least four Balkan nations suspended shipping on the Danube yesterday (Feb. 14) because of heavy ice on the river.

Keeping Europe frozen is a climate pattern called a "Russian Winter." In this pattern, a strong Siberian anticyclone hovers over northern Russia and triggers intense cold and snow, according to a NASA statement. That cold has lingered long enough to freeze stretches of the Danube.

The Danube flows through 10 countries, so precise records of its last freezing are not easy to come by. But an obvious reason for this year's freeze is the teeth-chattering cold. Taking the Danube city of Belgrade, Serbia, as one example, this year's cold streak is the worst in more than 20 years, said Jim Andrews, senior meteorologist at AccuWeather.com.

The deep freeze on Europe's waterways hasn't been deep enough for some in the Netherlands. Ice skating fans here had hoped that the beloved "Elfstedentocht," a 125-mile (200-kilometer) skating marathon, would be held for the first time in 15 years. The race is run on 22 separate stretches of canals, rivers and lakes, but race officials said not every stretch had the required 6 inches (15 centimeters) of ice.