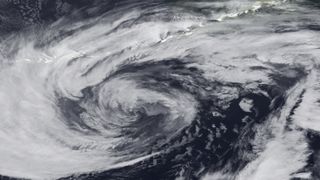 Alaska's wild winter has been relentless, with yet another hurricane-strength blizzard smacking the state yesterday (Feb. 14).

The lower 48 states have had an unusually mild winter, but Alaska has been buried under snow and shivering in frigid temperatures.

Temperatures in some towns have dipped to a whopping 30 degrees below average for this time of year. So much snow had fallen in the town of Cordova in January that Alaska's National Guard had to help dig residents out. The tiny village of Nome needed an emergency shipment of fuel after its final shipment for the winter was blown off course by another fierce storm.

A climate pattern known as the Pacific Decadal Oscillation is influencing this wicked winter, as it tends to keep Alaska cooler than normal. La Niña, a cooling of the waters of the equatorial Pacific, has also been in play, and it also typically creates colder temperatures for Alaska.

The Bering Sea is known for its strong winter storms, bringing high seas and heavy precipitation to areas from Alaska to the Northwest United States. In early November, a ferocious winter storm hit Alaska's coast. The latest monster storm was seen by the U.S. National Oceanic and Atmospheric Administration's (NOAA) AVHRR sensor on the Metop-A satellite.

The polar orbit of Metop-A is important for monitoring such systems in the high latitudes where coverage from the GOES satellite, which monitors much of U.S. weather, is limited. The data from Metop-A are also used in NOAA weather models.