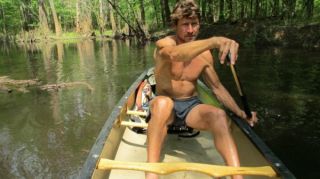 Since February, conservationist and wilderness explorer John Davis has traveled about 5,400 miles (8,690 kilometers) across the United States, powered only by the strength of his arms and legs, on a journey fueled by lust for adventure and a more lofty purpose.

"More important, I'm trying to help Americans realize that in order to preserve our natural heritage we need to not just save small parts of our wild places, but the connection between them," Davis said.

In early February, Davis swam away from Key Largo , snorkeling north, aiming to reach Canada's northeast coast by November, on a track that zigzags through the national parks, forests and natural places that lie in between.

In the six months since, he's made it to northern New York, traveling by bicycle about half the time, hiking the other 40 percent, and paddling a kayak or canoe the remainder of the way.

Despite crushing heat and a few hair-raising encounters, Davis said he's enjoyed his trek, which is sponsored by the Wildlands Network, a conservation organization he co-founded.

"I've had a great time," Davis said. He was in a lonely region of the Adirondacks , and cellphone reception was spotty; several times his conversation with a reporter was interrupted by a crash of static. Not a problem, Davis said. "If I lose you, I'll get on my bike and ride somewhere with a better connection."

Davis has traveled alongside biologists and naturalists for about two months out of his journey, but the rest of the time he's traveled solo, sleeping in a tiny tent in the forest at night, and carrying supplies from camp to camp.

To keep up his strength, he must eat close to 6,000 calories a day. Snacking is a requirement. Davis said he eats lots of protein bars, and keeps a vat of high-protein goo in his bike bag, a mix of peanut butter, honey, raisins and chocolate, and wolfs down a few spoonfuls at each stop.

During his journey, he's glimpsed a long list of wild animals, some of them exotic a smalltooth sawfish ("a fascinating creature, it looks like a big fish with a chainsaw for a nose"), a huge alligator gar, foxes, black bears, rattle snakes and nearly stepped on a water moccasin, but said he never felt threatened. "Bears, foxes, coyotes, venomous snakes, they've all been very pleasant," Davis told OurAmazingPlanet.

His biggest worry on the trail has been something far more prosaic.

"My scariest experiences by far have been dealing with traffic," Davis said. Sometimes the only route from one wild place to the next is a busy road, a tough place for a lone man on a bicycle. "It's not much fun and it is really dangerous," Davis said.

And all the roadkill along the way doesn't inspire confidence, he said. "I'm constantly reminded of the danger," Davis said. "I pedal past thousands and thousands of dead animals."

Away from busy thoroughfares, Davis has traveled through some beautiful places, and rattled off a list of a few favorites. Florida's Everglades , Conecuh National Forest in Alabama, Great Smoky Mountain National Park, West Virginia's Monongahela National Forest, and parts of the Catskills, are "still quite natural and wild," Davis said.

After several weeks exploring in the Adirondacks, where he'll have the chance to sleep in his own bed for a few nights Davis and his family live in the region Davis will travel to New York City for meetings with colleagues, and then head north again.

In all, he estimates he will have traveled up to 7,000 miles (11,265 km) by mid-November, when he plans to reach Canada's Gaspé Peninsula in Quebec.

"I think I have about 1,000 miles [1,610 km] to go," Davis said. "I hope to finish on cross-country skis. I may end up hiking through cold mud instead of skiing through beautiful snow," he said. "There's no guarantee with our warming winters."