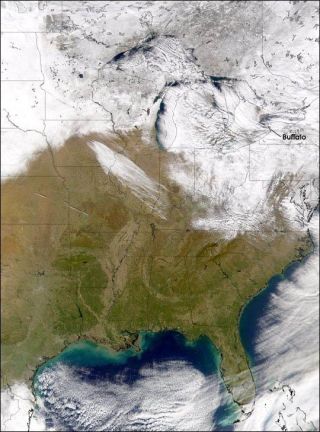 Hunker down, Buffalo. This image from 2000 shows how the lake effect hits hard and fast. In 24-hours, this storm dumped 25 inches of snow.
(Image: © NASA Earth Observatory.)

Right now, the snow is so bad near Buffalo, N.Y., that even the snow plows are getting stuck.

The deepest snow from these winter storms was 2 to 3 feet (0.6 to 0.9 meters) along a roughly 10-mile (16-kilometer) corridor from south Buffalo and northern West Seneca eastward to Depew, south Lancaster and Alden, according to the National Weather Service. Depew takes the snowy crown with a whopping 42 inches (107 centimeters). [Related: Report Severe Weather with Twitter ]

Western New York and many other cities around the Great Lakes can be miserable during the winter because of a phenomenon called the lake effect. This is essentially a snow machine that runs on two key ingredients: warm lake water and cold air.

The snow is created when bitter Arctic air spills south over the warmer Great Lakes. The cold air warms, moistens and forms into snow clouds, which drops the white stuff in whichever direction the strongest wind is blowing. Lake effect snow is heaviest downwind, or leeward.

In the Great Lakes region, towns east of lakes Erie and Ontario get the heavy snow from the lake effect, shoveling an average of more than 100 inches (254 cm) of snow each year, according to the National Oceanic and Atmospheric Administration (NOAA). Snow at the lakeside is often twice as deep as snow only 63 miles (100 km) inland. The lake effect also hits the Great Salt Lake in Utah and the Finger Lakes in New York.

The snow was thick enough in New York that the New York State Thruway, a major highway, was forced to shut down, The Weather Channel reported.