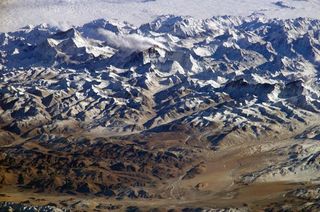 An age restriction for Mount Everest climbers may not be enough to keep a 9-year-old boy from attempting to become the youngest person to summit the world's highest mountain.

Tseten Sherpa may be a 9-year-old third grader, but he is set to attempt to scale the 29,029-foot (8,848-meter) Mount Everest next summer. The world record for the youngest climber was set this year by a 13-year-old American schoolboy named Jordan Romero. But because of a new age rule restricting the age of climbers, Tseten will have to make the climb illegally, which could earn a massive fine and keep his name out of the record books.

Tseten has begun practicing for his big feat next year and recently scaled 19,440-foot (5,925-meter) Mount Ramdung, in northern Nepal, his father Pemba Dorjee Sherpa told the Hindustan Times. The elder Sherpa known as the "Everest Express" holds the world record for the fastest ascent of Everest at 8 hours and 10 minutes.

Blocking Tseten's attempt is a new rule from the China Tibet Mountaineering Association, which regulates all mountaineering expeditions in China-controlled Tibet. They issued new climbing rules this year, banning children under 18 from undertaking Everest expeditions . Climbers must be at least 16 years old to climb the Nepali side.

"The current government regulations in both Nepal and Tibet indicate that [Tseten] will not be issued a permit to climb Mt. Everest," said Nima Norbu Sherpa, acting president of Nepal Mountaineering Association (NMA) that promotes mountaineering in Nepal. "Even if he does it, the feat will not be given official recognition as long as these age limits remain in place."

Mount Everest is the tallest mountain above sea level and is located on the border of Nepal and Tibet in the Himalayan mountain range.

In the past, young climbers could skirt the age law by ascending the northern route through Tibet. In 2003, 15-year-old Nepali schoolgirl Ming Kipa Sherpa did just that, and became the youngest person to summit Everest. Jordan Romero also climbed the Tibet side of the mountain.

Old-timers aren't welcome on Everest either. For the first time, the mountaineering association said a climber older than 60 will not be allowed to attempt the peak. In 2009, Nepali climber Min Bahadur Sherchan became the oldest summiter, reaching the top at the age of 76.

Ang Tsering Sherpa, the previous president of the NMA, said climbing Everest without a government permit was a punishable offence with a possibly hefty price tag.

"The permit fee is about $70,000," Ang told the Hindustan Times. "The fine will be double that. And the inability to pay the fine could result in imprisonment."

But that price tag may not be enough determent when nationalistic pride is on the line.

"Nepal is a small country and we do not get much good publicity ... I think all the Everest records should be held by Nepalese people," Tseten's father Pemba, told the Times of India after Romero's climb.