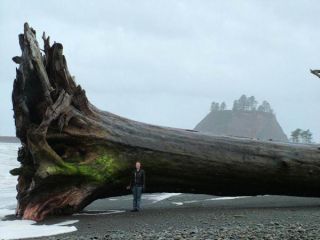 Drift log at La Push, Wash. Amanda Lachman, who is 6 feet (1.8 meters) tall, is standing in front of the tree.
(Image: © Phillip Lachman.)

In a part of the country accustomed to towering trees, a massive piece of driftwood washed ashore recently in La Push, a small community on the northwest coast of Washington's most westerly peninsula.

"It's not uncommon to find one as tall as I am, but that's pretty big," said Barb Manse of Olympic National Park, which surrounds La Push.

This "piece" of driftwood is actually called a drift log. It wasn't measured, but finding trees in the forest between 5 and 10 feet (1.5 and 3 meters) in diameter and a couple hundred feet tall isn't uncommon, Manse said. [Photos: IMAX Showcases National Parks’ Astounding Beauty]

Powerful winds accompanied by high tides are required to bring these monsters ashore.

"We can get some huge winter storms that cause the rivers that flow through the forest to flood and trees on the edge can topple in," Manse said.

The mountain slopes of the temperate rain forest that covers the Pacific Northwest rise quickly away from the La Push coast. When a strong gale blew though the community last spring, it toppled trees that then floated down rivers and washed up on the shore.

"The wind was howling and there were rain squalls at times," said Phillip Lachman, a retired school teacher who photographed the drift log on April 5, 2010. "On the beach at La Push there was a huge amount of driftwood of all sizes and there in the middle of the beach was this tree. We were mesmerized by the sheer size of it and wondered at the force of the wind that brought it here."

Lachman's daughter, Amanda, who is 6 ft (1.8 m) tall, is standing next to the drift log in the photograph he took.

Manse wasn't able to identify the tree's species, but she said Western red cedar, Douglas fir and Sitka spruce the signature tree of temperate rain forests are most common in the area.