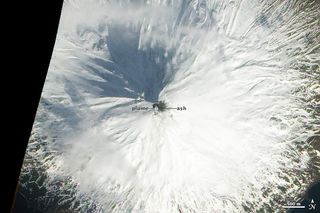 Cleveland volcano is one of the most active volcanoes in Alaska's Aleutian Islands. On March 14, 2013, NASA's EO-1 satellite snapped a picture of the tall stratovolcano from space.
(Image: © NASA Earth Observatory)

Rising steeply in the remote Aleutian Islands, Alaska's Cleveland volcano hid its most recent eruption from spying eyes this weekend. But the deep rumble from the volcano's three big blasts couldn't escape infrasound detectors, which "hear" low-frequency sounds below the range of human hearing. Thanks to advances in infrasound detection, scientists at the Alaska Volcano Observatory now listen to faraway volcanoes when they want to fill in the details of flare-ups.

Cleveland, on Chuginadak island, is one of the state's most active volcanoes, and is near plane routes heading from Anchorage to Asia. So gauging the size and timing of its eruptions is critical. Because it's so remote, the volcano doesn't have a local seismic monitoring network, which would alert scientists of an imminent eruption. But infrasound and seismic shaking recorded at distant monitors pinned the weekend's eruptions as relatively small, with the first flash at 9 a.m. ET on Saturday (May 4), followed by two more outbreaks. Infrasound from Cleveland's 2012 eruptions was detected as far away as 1,135 miles (1,827 kilometers), researchers reported November 2012 in the journal Geophysical Research Letters.