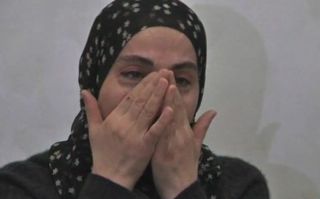 Zubeidat Tsarnaev, the mother of the two alleged Boston marathon bombers, cries during a press conference about her sons.
(Image: © Screen shot from a NYT video)

Despite a reported confession by one of the suspects, the parents of the two alleged Boston Marathon bombers say their sons are innocent.

"I am sure that my kids were not involved in anything," said a tearful Zubeidat Tsarnaev at a press conference in Russia on April 25. Tsarnaev maintains that her sons have been set up, and has also suggested that the bombing might have been staged.

Regardless of the legal outcome of the case, such denial is not uncommon in the families of killers, experts say, though plenty of killers’ family members are also well aware of their relatives’ capability to kill. [Understanding the 10 Most Destructive Human Behaviors]

"In some cases, they deny the participation of their kids; in other cases, they say they were surprised," said Dean Alexander, director of the Homeland Security Research Program at Western Illinois University and a researcher of terrorists' family ties. "In other cases, they condemn."

Psychologists say the Tsarnaevs' reactions may also stem from circumstances unique to the case — for instance, the family's history in the volatile Caucasus region, the parents' distance from the bombing and other personal factors.

Dzhokhar Tsarnaev, 19, was charged on April 22 for his role in setting off two bombs near the finish line of the Boston Marathon on April 15, killing three and injuring hundreds. Also allegedly involved was Tsarnaev's 26-year-old brother, Tamerlan, who died after an overnight shoot-out with police on April 18.

After the FBI released photos of the suspects, the two brothers allegedly hijacked a car, leading police on a chase during which the alleged bombers threw improvised explosive devices. Tamerlan Tsarnaev, along with an MIT police officer, was killed in the subsequent shoot-out, but Dzhokhar Tsarnaev escaped.

Dzhokhar Tsarnaev was later arrested after being found wounded and hiding in a stored boat in Watertown, Mass. Authorities said that when Tsarnaev was questioned, he confessed to the bombings.

While the Tsarnaev parents have maintained their sons are innocent, other family members see the situation differently — illustrating how variable reactions can be. The Tsarnaev brothers' uncle, Ruslan Tsarni, who had not spoken with the brothers since 2010, called the men "losers." According to Tsarni, Tamerlan Tsarnaev began adopting radical Islamist ideas and then influenced his younger brother.

"Dzhokhar is being used by his older brother. [Tamerlan] used him as his — not even accomplice — as some kind of instrument," Tsarni told CNN.

But very little research has focused on how families respond when a loved one goes bad, or why some family members may have more trouble than others accepting a perpetrator's involvement.

"There's a lot of literature on the effects of parental incarceration, for example, on children, but there isn't the opposite," said Priscilla Dass-Brailsford, a trauma psychologist at Georgetown University Medical Center.

For parents, acceptance can be the hardest. Ten years after the mass shooting at Columbine High School, the mother of shooter Dylan Klebold wrote an essay in O magazine describing what it was like to find out her son was one of the killers.

"It took about six months for the sheriff's department to begin sharing some of the evidence explaining what happened that day. For those six months, Dylan's friends and family were in denial," Susan Klebold wrote in the essay. "We didn't know that he and [fellow Columbine shooter] Eric [Harris] had assembled an arsenal of explosives and guns. We believed his participation in the massacre was accidental or that he had been coerced. We believed that he did not intend to hurt anyone."

As she came to terms with how wrong she and her family had been, Klebold was overwhelmed with grief and guilt. She second-guessed every parenting choice, even questioning whether she should have told her son she was proud of him, fearing those words made him feel pressured. [10 Scientific Tips for Raising Happy Kids]

"It was impossible to believe that someone I had raised could cause so much suffering," she wrote.

The Klebolds stayed quiet and isolated after the Columbine shooting, whereas the Tsarnaev parents have been outspoken, participating in press conferences and speaking to the media.

Zubeidat Tsarnaev has even gone so far as to entertain conspiracy theories about the bombing, saying she's seen theories that the blood shown at the scene near the Boston Marathon finish line was actually red paint.

Much is still unknown about the Tsarnaev family, Dass-Brailsford told LiveScience, but the media interactions suggest defensiveness and denial.

The family's history may also contribute, Dass-Brailsford said. Father Anzor Tsarnaev is Chechen, and Zubeidat Tsarnaev is Avar, both minorities in the conflict-torn Caucasus region of Eastern Europe. Oppressed people tend to be suspicious of government authority, Dass-Brailsford said, which could explain some of the Tsarnaevs' skepticism about the bombing.

Another unusual aspect of the case is the parents’ extreme distance from the site of the bombings, said Nancy Berns, a sociologist at Drake University in Iowa who has researched grief. Being in Russia, so far away, could make it easier to remain in denial, Berns told LiveScience.

The media attention likely isn’t helping, either. Loved ones of victims or perpetrators of violent deaths often lack the luxury to grieve in private, Berns said.

"They're often having to try and make sense of it in the public eye, through interviews, through people asking them questions," she said. "I am hearing that process unfold for them."