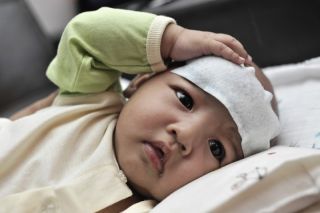 Mom's anxiety during pregnancy could influence her child's immune system in the first year of life.
(Image: © Zulhazmi Zabri, Shutterstock)

Mom's anxiety during pregnancy may influence the development of her baby's immune system, new research finds.

Infants whose mothers experienced high anxiety during pregnancy had suppressed immune responses to vaccinations at 6 months old, according to a study to be published in the journal Brain, Behavior and Immunity.

The stifled immune response only showed up when infants hadn't received the full course of the vaccine tested, however.

"It's not as if the experience of stress is going to be more powerful than an immunization," said study researcher Tom O'Connor, a professor of psychiatry at the University of Rochester Medical Center. "At non-optimal levels of protection from immunization, we do see the effect of prenatal anxiety." [5 Ways Your Cells Deal With Stress]

Anxiety and the immune system

Thus, anxious moms need not fear that their vaccinated babies are more prone to infectious disease. What the study does show, O'Connor told LiveScience, is that the human immune system is similar to other animals in its response to prenatal stress.

"Both in rat and in monkey studies, stress in pregnancy is associated in the offspring with reduced immune competence," O'Connor said.

There was reason to believe the same might be true in humans. Mom's pregnancy stress and anxiety has been linked to neurodevelopment in infants and children's psychiatric symptoms, suggesting that the prenatal environment can have important effects. But no one had ever tested the immune systems of babies with anxious moms directly.

To do so, O'Connor and his colleagues recruited 20- to 34-year-old pregnant women to complete questionnaires about their levels of worry at eight to 12 weeks of pregnancy. The scientists filtered those women down to the most and least anxious, resulting in a sample of 210 women.

These women completed anxiety interviews at 20 and 32 weeks gestation and also provided saliva samples so researchers could measure their levels of cortisol, a stress hormone. After giving birth, the women gave permission for their babies to be tested for their immune response to the Hepatitis B vaccine, which is typically given in three doses. The first is within days of birth, the second is at 2 months of age and the third at 6 months of age.

At two months, the researchers found no link between mom's pregnancy stress and baby's immune response, likely because the immune system is immature and not particularly responsive at that young of an age, O'Connor said.

At 6 months old, however, the babies began to show some differences. Among the babies who had not yet had their third dose of Hepatitis B vaccine, those with stressed moms showed a weaker immune response to the vaccine than those with relaxed moms. The immune response was measured by drawing blood and finding the babies' level of antibodies, proteins used by the immune system to identify specific invaders.

The researchers took into account health factors such as maternal obesity, pregnancy complications and mode of delivery as well as demographic factors when comparing the babies.

In babies who had received the full three-dose course of the vaccine, the effect of mom's stress during pregnancy disappeared.

The researchers also conducted a second experiment, exposing the babies' immune cells to molecules designed to evoke a response. They found that in babies of stressed moms, some responses were actually overly aggressive. In other words, mom's pregnancy stress doesn't simply weaken the immune system overall, it changes the immune system's components.

The finding of overactive immunity might explain previous studies that have linked maternal stress to children's asthma and autoimmune disorders, which occur when the body attacks itself, O'Connor said.

The results showed a "dose-response" pattern, O'Connor said, so the more anxiety and worry a mom reported, the greater the effects on the child's immune system.

"The key issue that various folks are struggling with is to find out if interventions in pregnancy can reduce the effects," O'Connor said. "We just don't know the answer to that yet."