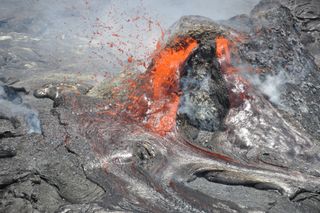 A burst of spatter erupts from a small cone on the south rim of Pu'u 'O'o crater on April 20.
(Image: © Hawaii Volcano Observatory)

The waning magma levels could mean a change in activity is coming at Pu'u 'O'o Crater, in Kilauea volcano's East Rift Zone. Kilauea's underground plumbing links both the summit lava lake and Pu'u 'O'o Crater. Lava flows pulsed from spatter cones at the East Rift Zone throughout the weekend. Yesterday, geologists had to rescue one of the HVO's webcams after lava heated and warped its tripod.