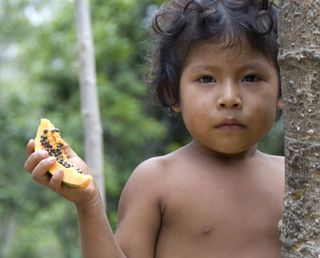 A deadline for the removal of illegal settlers from the lands of a threatened tribe in Brazil has passed without action, according to a British-based advocacy group for indigenous people's rights.

The Awá, an indigenous group of about 450, has legal rights to their lands and a judge's order requiring the removal of illegal loggers and other settlers from the area by the end of March. But so far, no illegal settlers have been evicted. Advocates are particularly concerned about 100 or so "uncontacted" Awá, who live in the forest without interacting with the outside world.

"We are scared because the loggers could kill us and the uncontacted Indians," Awá tribe member Haikaramoka'a told the indigenous advocacy group Survival International. [Gallery: Faces of the Awá Tribe]

Violent clashes between Brazilian tribes and illegal settlers aren't unknown, but the Awá are also threatened by deforestation caused by the loggers. The tribe relies on the Amazon forest for hunting and gathering. Uncontacted Awá also lack exposure to common diseases, so even the most casual contact could be deadly.

"They don't have immunity to common diseases like a cold or a flu, which could kill them," Sarah Shenker, a campaigner for Survival International, told LiveScience in March.

Survival International has dubbed the Awá "the most threatened tribe in the world," because of the deforestation threatening their land. The group's largest territory, which spans about 463 square miles (1,200 square kilometers) has already lost about 30 percent of its tree cover.

The Awá were originally contacted by the Brazilian government in 1973. In the 1980s, a railway line constructed through Awá territory brought settlers and ranchers to their land, sparking the massive deforestation.

Brazil's National Indian Foundation, FUNAI, is responsible for protecting the tribe as well as other indigenous groups in the country.

Indigenous land rights are protected in the Brazilian constitution, and the Awá have won numerous legal battles for the rights to their land. In March 2012, a Brazilian judge issued an order to evict illegal settlers from the land. FUNAI has so far built one base camp from which to launch the evictions, but says it needs two more base camps before anything can be done. FUNAI is reportedly waiting for support from Brazil's Justice Ministry and the police to carry out the evictions.

Theoretically, the agency is subject to a fine for every day the deadline passes without action. But those fines are rarely levied, Shenker told LiveScience.

"It's not too late for the Awá, but it soon will be," Survival International director Stephen Corry said in a statement. "It is entirely within the Minister of Justice's capabilities to evict loggers, but he must act today. If he doesn't, tomorrow the Awá will be gone."