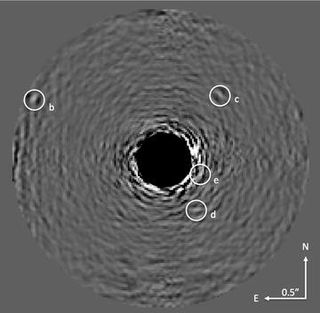 Image of the HR8799 planets with starlight optically suppressed and data processing conducted to remove residual starlight. The star is at the center of the blackened circle in the image. The four spots indicated with the letters b through e are the planets. This is a composite image using 30 wavelengths of light and was obtained over a period of 1.25 hours on June 14 and 15, 2012.
(Image: © American Museum of Natural History)

According to SPACE.com, scientists were surprised to find that the chemical compositions of four massive planets 128 light-years away weren't as mixed as expected. At the temperatures of these planets — 1340 degrees Fahrenheit (727 degrees Celsius) — researchers would expect to see atmospheric mixes of ammonia and methane. Instead, each of the four worlds exhibited either ammonia or methane, but not both.

"These warm, red planets are unlike any other known object in our universe," astronomer Ben Oppenheimer, chair of the astrophysics department at the American Museum of Natural History in New York City, said in a statement. "All four planets have different spectra, and all four are peculiar. The theorists have a lot of work to do now."

To fingerprint the atmosphere of planets orbiting a distant star, the researchers had to filter out the light of that star, known as HR 8799. They did so using advanced imaging at the Palomar Observatory in California.

The remaining light spectra from the planets showed light-absorption patterns that researchers could translate into ratios of gases in the atmosphere. Chemicals and gases absorb light differently, leaving unique signatures on the spectra.