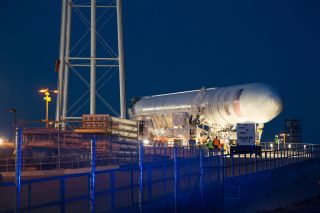 The Antares rocket is rolled out April 6. The private spacecraft is set for a maiden voyage at 5 p.m. EDT on April 17.
(Image: © NASA/Wallops/Brea Reeves)

A new private rocket is set for a test flight into space today (April 17), potentially opening up a new avenue for unmanned missions to the International Space Station.

The Antares rocket is scheduled for lift-off at 5 p.m. EDT (2100) GMT from Virginia's Mid-Atlantic Regional Spaceport (MARS), according to SPACE.com. The rocket may be visible from Portland, Maine to Charleston, S.C. The launch will also be live-streamed at SPACE.com.

The Antares rocket was built by Orbital Sciences Corp. If Wednesday's launch goes well, the rocket could soon become the second private spacecraft that delivers supplies to the International Space Station for NASA. California-based SpaceX has already flown two missions to the ISS, one in October 2012 and one in March.

Orbital has a $1.9 billion contract with NASA to fly eight unmanned supply missions to the ISS. The private contracts replace the space shuttles, which were retired in 2011.

To shuttle humans into space, NASA currently relies on Russian Soyuz spacecraft, but the agency hopes to get private American spacecrafts pulling this duty by 2017. SpaceX, Boeing and Sierra Nevada Corp are the three major contenders for this contract.

The maiden voyage of Antares will take about 18 minutes, according to SPACE.com. Low clouds and rainstorms may delay the launch, which would then be rescheduled for Thursday. If the weather holds, however, the rocket will streak on a southeastern trajectory visible to lawmakers in Washington, D.C.

For full coverage of the Antares launch, visit SPACE.com.