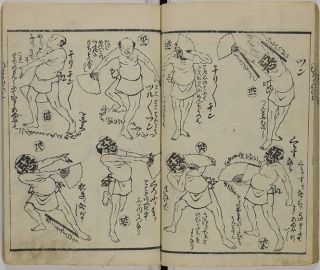 Compact, paper-bound, picture-filled books of Japan's Edo period helped democratize reading — and apparently dance lessons — for those living under the strict rule of shoguns from 1615 to 1868.

These beautiful wood-block illustrated books, called "ehon," circulated widely, and examples of the volumes are currently on display at the Smithsonian’s Arthur M. Sackler Gallery in Washington, D.C., as part of an exhibit called "Hand-Held: Gerhard Pulverer’s Japanese Illustrated Books."

One of the highlights of this show is an 1815 book called "Odori Hitori Geiko," translated as "Dance Instruction Manual," or "Practice Dancing Alone." The manual acts like a step-by-step guide for some traditional dance sequences, and it was illustrated by Katsushika Hokusai, the Japanese artist credited with one of the most recognizable images of the past 200 years: "The Great Wave off Kanagawa."

The Smithsonian Institute made a mesmerizing moving gif of the dance steps in action.

Pulverer's collection of more than 2,000 Japanese printed books was acquired in its entirety in 2007 by the Smithsonian. The exhibition is on view until Aug. 11.