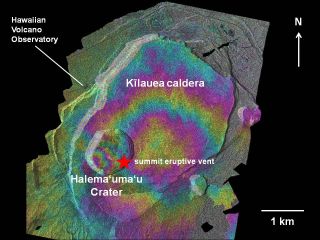 At the very top of Kilauea sits Halema'uma'u crater and its churning, steaming lava lake. Since the lava vent burst open in 2008, scientists at the Hawaii Volcano Observatory have closely monitored its oscillations. Their techniques include recording earthquakes, ground deformation and gas emissions, as well as analyzing rocks tossed out of the lake by small explosions.

Now, there's a new weapon in the arsenal. By combining two types of highly detailed radar data, scientists can track surface-elevation changes at Kilauea volcano to less than a half-inch (1 centimeter) resolution, a new study shows. The findings were published online March 1 in the journal Geophysical Research Letters.

The study reveals a link between subsidence, or sinking of the surface, near the lava lake and a collapse of the vent walls. When the wall rocks tumble onto the searing-hot lava, explosions toss rocks and lava out of the vent and create loud roars. The flying rocks are hazardous to scientists working in the area and can damage monitoring equipment, said Nicole Richter, a graduate student at Friedrich-Schiller-University in Germany.

"These eruptions are small, but they are still hazardous to people," she told OurAmazingPlanet.

Looking at subsidence within 328 feet (100 meters) of the lava lake, Richter and her colleagues saw the vent walls collapse more often when the crater was subsiding. The vent walls were more stable when subsidence rates were lower.

The results come from a combination of synthetic aperture radar (InSAR) from Germany's TerraSAR satellite and lidar topography of the volcano. Richter used the data to create interferograms, images that combine two or more pictures of the same place to make precise measurements.

InSAR could let scientists monitor Halema'uma'u crater for future widening and vent collapses, without exposing them to the hazardous, sputtering bursts and poisonous gas emitted from the active lava lake, researchers said.

"This is the only method we can use to actually see how the instability of the vent wall develops over time," Richter said.