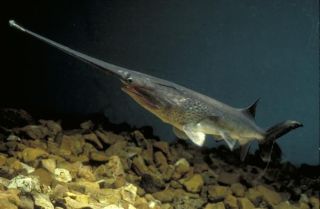 The idyllic small town of Warsaw, Mo., nestled on the banks of the Osage River, has emerged as a Midwestern Mecca for the illegal international trade in caviar.

The finest caviar — a tangy delicacy made from the eggs, or roe, of sturgeon — traditionally came from the beluga sturgeon of the Caspian and Black Seas in Southwest Asia.

Years of overfishing, however, have depleted those sturgeon populations, forcing caviar enthusiasts to cast their hungry eyes over the American Midwest.

And Missouri, whose state fish is the paddlefish (Polyodon spathula) — a sturgeon with a distinctive long snout, or rostrum — has emerged as a major caviar source, according to The Kansas City Star. [Image Gallery: The Freakiest Fish Species]

Just one problem: Commercial fishing is banned in the Show-Me State, except by permit in the Mississippi River, whose muddy waters don't produce the high-quality roe valued by caviar lovers.

But with fine Missouri roe commanding prices as high as $550 per pound, according to the Star, why let a little thing like the law stand in your way?

Such was perhaps the thinking of eight men now charged with paddlefish poaching, according to the Associated Press. The federal charges were filed after an investigation that spanned nine states and lasted several years.

One defendant was seized at Dulles International Airport in Washington, D.C., while attempting to smuggle several pounds of paddlefish roe out of the country in his luggage, according to a statement by the U.S. Department of Justice.

"Poaching is really stealing a resource meant for the citizens of Missouri and others who come here to fish," Nick Laposha, Kansas City protection regional supervisor for the Missouri Department of Conservation, told the Star. "The commercialization is the problem."

Like their cousins in Asia Minor, the paddlefish population of the Mississippi basin has declined precipitously due to overfishing and alterations of river habitats by dam construction, according to the U.S. Geological Survey.

Though the fish were once common throughout the central United States and into Canada, paddlefish are no longer seen in four states or in Canada, and several states list the ancient species as endangered or threatened. A close relative, the Chinese paddlefish (Psephurus gladius), is believed to be extinct.

Paddlefish, which can grow as large as 7 feet (2 meters) and weigh over 160 pounds (73 kilograms), are an ancient species that has survived largely unchanged from the late Cretaceous period, around 70 million to 75 million years ago.

Like sharks, paddlefish have skeletons made primarily of cartilage. Their long snouts contain sensors that can detect weak electrical fields and help the fish to feed on plankton.