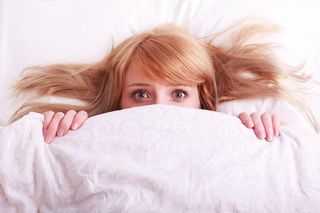 When the 67-year-old woman came to the hospital, she was deeply afraid of two things — the visions of odd-looking faces that appeared hovering before her, and that the hallucinations might mean she was losing her mind.

"She was absolutely terrified by what she was seeing," said Dr. Bharat Kumar, an internal medicine resident at the University of Kentucky who treated the woman. In fact, the patient and her family were so concerned in the days before she came to the hospital, they asked a priest about performing an exorcism, Kumar said.

The woman drew a picture of what she saw. The faces had large teeth, eyes and ears, and a horizontally elongated shape, like a football.

That peculiar shape and the fact that the patient recognized that she was hallucinating (rather than believing the visions to be real) provided two important clues in making a diagnosis, Kumar said. He determined that the woman had condition called Charles Bonnet syndrome.

Patients with the syndrome may see small people and animals, bright moving shapes or distorted faces. These hallucinations are purely visual; no sounds accompany them.

In the woman's case, the condition developed because she had macular degeneration. Tissue within the retinas of her eyes was deteriorating, and her ability to see was declining.

Charles Bonnet syndrome results from the absence of such sensory input to the brain. "When it expects sensory input and receives nothing, it often creates its own input," Kumar explained.

The brain isn't a sophisticated computer that processes information objectively and efficiently, he said. "It's more of a wibbly-wobbly, messy-guessy ball of goo."

There is no treatment for the condition, but in many cases the hallucinations stop happening as the brain becomes used to vision loss. Patients who are very frightened might be given anti-psychotic medications, but these drugs have serious side effects and aren't appropriate for everyone.

The woman was grateful to receive her diagnosis and learn that she was not losing her mind, Kumar said. When he followed up with her three months later, she was still having the hallucinations, but they were happening less often.

A 2010 study showed that 10 to 40 percent of elderly patients with visual impairments may have Charles Bonnet syndrome.

Kumar had never before seen a patient with the condition, although he noted that it may occur more commonly than it is diagnosed. "Patients are often hesitant to say that they see things because they are afraid that they will be called crazy," he said.

The case report was published online Feb. 25 in the journal Age and Aging.