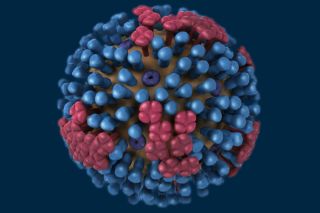 A representation of the structure of a generic flu virus.
(Image: © U.S. Centers for Disease Control and Prevention.)

Viruses can acquire fully functional immune systems, according to new research that bolsters the controversial theory that viruses are living creatures.

Until now, scientists thought that viruses existed only as primitive particles of DNA or RNA, and therefore lacked the sophistication of an immune system.

The study, published in the journal Nature, is the first to show that a virus can indeed possess an immune system, not to mention other qualities commonly associated with complex life forms.

The belief that viruses are living creatures “stems from the fact that viruses have their own complex genome, they replicate to make more of themselves, and they are evolving,” co-author Andrew Camilli of the Tufts University School of Medicine told Discovery News.

PHOTOS: The Art of Microbiology

The use of a complex immune system “doesn’t prove” that viruses are living beings, “but it does add to the argument,” he said.

Living organisms are typically defined as being capable of vital functions, such as the ability to grow and adapt to the environment over successive generations. Viruses are now on the fence between being considered a biological entity and an actual living creature.

Camilli and his colleagues focused their investigation on a viral predator of cholera bacteria. This type of virus is known as a bacteriophage (“phage” for short).

Lead author Kimberley Seed, a postdoctoral fellow in Camilli’s lab, was analyzing DNA sequences of phages taken from stool samples of Bangladesh cholera patients. She was surprised to find genes for a functional immune system previously only found in some types of bacteria.

Not only can some viruses have an immune system; some also can steal them from bacteria.

The scientists found that viruses can capture immunity genes from bacteria during a phase when “the viral genome is being replicated into dozens of copies within the infected host cell,” Camilli explained. The virus therefore steals an immune system from the bacteria. This benefits the phage virus.

“The immune system allows the phage to target and destroy specific inhibitory genes of the host cell by literally cutting the target genes into pieces,” Seed told Discovery News. By disarming these genes, “the phage essentially disarms the host cell, and can then proceed with the infection and kill the host cell.”

While we tend to associate both viruses and bacteria with health threats, that is not always the case. In this instance, the virus winds up on the side of humans.

Camilli explained that “phages are killers of bacteria. If the species of bacteria they happen to kill is a human pathogen, then the phage is doing us a favor.”

The researchers hope that this activity could battle “superbugs,” which are bacteria with a resistance to most are all current antibiotics.

Contagion: Is a Killer Virus Out There?

Mammals, including humans, possess immune systems that, unlike those of bacteria, are encoded on much larger pieces of DNA.

“It would be very difficult, if not impossible, for a virus to capture (such an immune system),” Camilli said.

Sylvain Moineau, a professor in the Department of Biochemistry, Microbiology and Bioinformatics at Université Laval, is one of the world's leading experts on bacteriophages. Moineau told Discovery News that the discovery of a phage with an immune system "is a remarkable finding. Phages always seem to find a way to impress us."

Moineau and colleague Manuela Villion remind that phages are among the most abundant biological entities on the planet, outnumbering their bacterial hosts tenfold. Whether they and other viruses represent living organisms, however, is still up for debate.