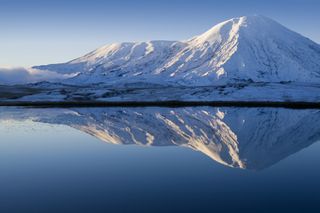 Does a monster lurk beneath the surface of a lake in eastern Siberia?
(Image: © Denis Burdin | Shutterstock)

For centuries, strange reports of a large, underwater creature have come from people living near the remote Lake Labynkyr in Siberia.

Now, a team of scientists from the Russian Geographical Society report they've found the skeletal remains of an animal that fits the description of the "Devil" of Lake Labynkyr, according to the Siberian Times, though skeptics have yet to be convinced of the legendary creature's existence.

"There have been all sorts of hypotheses about what kind of creature it could be: a giant pike, a … reptile or an amphibian," said research team geologist Viktor Tverdokhlebov, as quoted in the Siberian Times. "We didn't manage to prove or to disprove these versions … [but] we managed to find remains of jaws and skeleton of some animal."

The Russian research team — which included divers from the Russian Emergencies Ministry, camera people from the Sakha National Broadcasting Company and scientists from Yakutsk State University — was exploring the lake bottom to gather samples of water, plants and animals.

And on the bottom of the lake, using an underwater scanner, they discovered the large jawbone and skeleton, the Voice of Russia reports. Despite their claims, the team brought no physical evidence of their purported find to the surface. [Loch Ness, Chupacabra & More: Our 10 Favorite Monsters]

A mysterious lake that never freezes

The lake itself has been a source of scientific mystery for generations. Though other lakes in the region freeze solid during the long Siberian winter, Lake Labynkyr doesn't — it maintains a near-constant surface temperature of 36 degrees Fahrenheit (2 degrees Celsius), according to the Daily Mail.

This has led some to speculate that an underground hot spring may warm the lake. This scenario is plausible, as much of the rock in the Lake Labynkyr area is volcanic, and scientists know most of the eastern Siberia area is seismically active, according to the Smithsonian/NASA Astrophysics Data System.

The large lake measures roughly 17 square miles (45 square kilometers) in area and has an average depth of 171 feet (52 meters), though a large underwater trench runs as deep as 263 feet (80 m), the Daily Mail reports.

This is not the first time some evidence of Lake Labynkyr's "Devil" has surfaced. In addition to local folklore, some scientists have reported seeing a strange creature in the lake (and in nearby Lake Vorota).

In 1953, a team of geologists from the Soviet Academy of Sciences led by Viktor Tverdokhlebov visited Lake Vorota. Tverdokhlebov reported seeing a large, underwater animal the size of an orca swimming near the surface of the lake, according to a report in the Siberia Times.

And in 2012, an associate professor of biogeography at Moscow State University Ludmila Emeliyanova claimed that she used sonar readings to record several large, underwater objects in Lake Labynkyr.

"I can't say we literally found and touched something unusual there, but we did register with our echo-sounding device several seriously big, underwater objects, bigger than a fish, bigger than even a group of fish," Emeliyanova said, as quoted in the Siberia Times.

Of course, considerable skepticism surrounds rumors of the Labynkyr "Devil" and any Vorota "monster," especially given the lack of any verifiable photographs, video or physical evidence.

Yury Gerasimov, of the Institute of Freshwater Biology at the Russian Academy of Sciences, casts doubt on any such cryptozoological reports, according to the Siberian Times. He questioned claims regarding the creature's size.

"If we trust the stories about this 'Devil,' there must be about 1.5 meters [5 feet] between its eyes. It means the length of its body must be about 7 to 8 meters [23 to 26 feet]," Gerasimov told the Siberia Times.

It's often supposed that the creature is a large fish such as a pike. However, "pike do not live so long in order to reach such a big size," Gerasimov said. "There are two factors that help fish to grow: nutrition and comfortable water temperatures. Even if nutrition is perfect there, surely the temperatures are not that high. So, in my opinion, the view about a huge pike is a fantastic one," Gerasimov said.