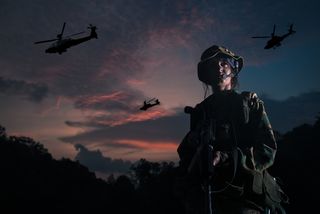 Last week, the U.S. Department of Defense announced it will lift its longstanding ban on women in combat, a groundbreaking decision that will open up thousands of military positions to women.

And with more women in the armed forces, there might be a greater need for attention to women's health — especially because female soldiers are at a much higher risk for sexually transmitted infections (STIs) than civilian women, researchers say.

In a review of studies on the topic, researchers at Brown University's Women and Infants Hospital found that the STI rates for servicewomen are seven times as high as the rates for civilian women. That could be because women in the military are more likely to engage in risky sex and might feel uncomfortable asking for condoms, the team said.

"(Navy) women reported feeling stigmatized as promiscuous if they requested condoms and believed their male counterparts to be exempt from the same criticism," researcher Vinita Goyal noted in a statement. "They also reported not using condoms because if found, it would be evidence that they were violating the military policy that prohibits sexual activity when deployed."

Just a third of sexually active unmarried active-duty female soldiers said they used a condom the last time they had sex, according to the study, and nearly 60 percent said they had more than one sexual partner within the last year.

Another survey found that, compared to civilian women, female Army recruits have much higher rates of binge drinking, which has been linked to unsafe sex practices and unwanted sexual activity for women in the military. In a related finding, 31 percent of female Marine Corps recruits said they had sex under the influence of alcohol or drugs in the past three months.

"Studies indicate a high prevalence of risky sexual behaviors — including inconsistent condom use, multiple sexual partners, and binge drinking — that lead to unintended and unsafe sex," Goyal said. "These high-risk sexual practices likely contribute to chlamydia infection rates that are higher than the rates in the general U.S. population. Human papillomavirus (HPV) infection and cervical dysplasia may also be higher among young, active duty servicewomen."

In a previous study, Goyal found that active-duty servicewomen also face a higher risk of unintended pregnancy, suggesting that rules that prohibit sexual activity during deployment might hold back female military personnel from getting and using birth control.