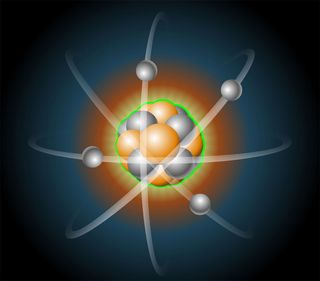 Researchers have found the proton is smaller than thought. The proton is one of the ingredients (along with neutrons and electrons) of the atoms that make up our bodies and the world around us.
(Image: © aurin | Shutterstock)

How many protons can dance on the head of a pin? The answer is nowhere near as straightforward as one may think — and it might offer new insights into one of the most well-tested theories in physics.

An international team of scientists recently tried to find out the actual size of a proton, one of the ingredients (along with neutrons and electrons) of the atoms that make up our bodies and the world around us.

Reporting this week in the journal Science, the researchers found that the particle's radius is 0.84087 femtometers. A femtometer is a millionth of a billionth of a meter, or so small that the wavelength of gamma radiation is 100 times longer. The new measurement is about 4 percentsmaller than the currently accepted radius of 0.8768 femtometers, and that small difference presents a puzzle.

If the smaller size is correct, then there's something missing in physicists' understanding of quantum electrodynamics, which governs how light and matter interact.

Aldo Antognini, a physicist at the Swiss Federal Institute of Technology and first author of the paper, told Livescience the difference could mean one of three things.

First, that there is some error in the earlier work, though that isn't likely given how many times various experiments were repeated.

The second possibility is that some piece of the calculations for the proton's size is missing. "Maybe we don't understand fully proton structure," Antogninisaid.

The third explanation is that the current theories of quantum electrodynamics are wrong, though chances of that seem slim given that the theory works very well and it has been tested many times. [Wacky Physics: The Coolest Little Particles in Nature]

This result isn't the first time a discrepancy has shown up. In 2010, Antognini, working with an international team led by Randolf Pohl of the Max Planck Institute of Quantum Optics in Garching, Germany, found the proton radius seemed to be 0.84185 femtometers.

How to measure a proton

To find the size of a proton scientists have used three methods. One is electron scattering: firing negatively charged electrons at positively charged hydrogen nuclei (protons) and measuring how they are deflected. The scattering pattern can then give an idea of how big the region of positive charge is.

The second method is to measure how much energy it takes to get an electron to move to different orbital regions around a nucleus. Electrons usually stay in regions that are a certain distance from the nucleus. Increase their energy and they become excited, and move to a different region, called an orbital. The electrons then fall back into their unexcited states and emit a photon. By looking closely at how much energy it takes to move an electron from one orbit to a higher-energy one, and the wavelength of the photon emitted when the electron drops back to its lower-energy orbital, it's possible to estimate a proton's size.

Last, the method used in the latest set of experiments, involves muonic hydrogen, which is a proton with a muon, rather than an electron, orbiting around it. Like electrons, muons are negatively charged, but they are 207 times heavier. That means they fly closer to the proton, and it takes more energy to move them to higher-energy orbitals. The greater energy differences make measuring them easier. Firing a laser at the muonic hydrogen excites the muon, moving it to a different orbital. The muon then falls back to its lower-energy state, emitting an X-ray photon.

The first two methods, used over decades, had come up with the larger value for the proton's radius. The latter method, which scientists say has a smaller uncertainty, found the smaller one. These calculations, though, are quite complex.

Antognini's team, carrying out experiments at the Paul Scherrer Institute in Switzerland, not only did the muonic hydrogen experiment a second time, they also took steps to ensure a more accurate measurement. The discrepancy remained. "Maybe there is something in [proton] structure only highlighted by muons," Antognini said. [Weird: Top 10 Unexplained Phenomena]

That's why the new value is proving such a mystery. Quantum electrodynamics (QED) is probably right, and it's also not likely that the earlier experiments were that far wrong due to simple errors, experts say.

"There might be some missing terms in the calculations," said Helen Margolis, a research scientist at the National Physical Laboratory in the U.K., who was not involved in the research. "QED has been tested to incredible levels so far, but the mathematical foundation is not as secure as you might like."

Chad Orzel, an associate professor of physics and astronomy at Union College and author of "How to Teach Physics to Your Dog" (Scribner, 2010), said the results are good for physics generally, because of the questions they raise. "It's really boring when all the measurements and theory agree with each other. This kind of disagreement gives us something to talk about that isn't the Higgs boson."

Editor's Note: This article was updated to correct the definition of femtometer.