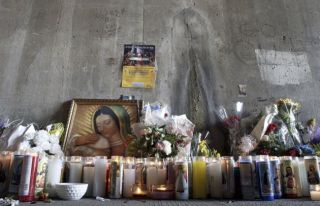 Voice of Reason: The Viaduct Virgin

Thousands of Roman Catholics have made an impromptu shrine of an unlikely spot, this time a Chicago underpass whose grimy concrete wall bears a water-runoff stain many are heralding as a miraculous "apparition." Most of "the circus crowd" saw the "big blot" as the Virgin Mary, reported the Chicago Tribune (May 5, 2005), dubbing it "Our Lady of the Underpass." Many were convinced it marked the passing of Pope John Paul II.

In fact, the image is merely another simulacrum--a "Rorschach Icon" in which a random pattern is "recognized" by the mind's tendency, known as pareidolia, to interpret vague images as specific ones. (The best known simulacrum is the Man in the Moon. Frequently, the discerned image is a face or other human shape because infants begin to recognize people as soon as they can see.)

Highly publicized simulacra include the figure of the Virgin formed by a stain on a store's bathroom floor, the face of Jesus in a giant forkful of spaghetti illustrated on a billboard, a Christ portrait in skillet burns on a tortilla, a faceless Madonna on the glass façade of a finance building and another on a hospital window, and an image of Jesus in the foliage of a vine-covered tree. A more recent instance was the face of a woman (looking more like a Hollywood starlet than the Virgin it was said to be) scorched onto a grilled cheese sandwich. It was subsequently purchased by an online casino (GoldenPalace.com) for publicity purposes.

I have visited several of these makeshift shrines, typically prompted by someone noticing a simulacrum and calling it to the attention of others. Soon, a predominately Catholic crowd gathers offering candles, flowers, pictures, and other tokens, given with prayers and, often, tears. At the Chicago underpass site (as reported by Skeptical Inquirer magazine reader Diana Harris, who visited several times on my behalf), some people were eager to touch the image, presumably in the belief it could work blessings or even healing cures, and some held their children up to touch or kiss the stain.

Catholic church authorities do not endorse such inkblot visualizations, one priest attributing them to "pious imagination." However, the church is careful not to disparage them, invariably taking an end-justifies-the-means position. In the case of the Chicago Viaduct Virgin it was expressed by Cardinal Francis George (after returning from the funeral of Pope John Paul II and the selection of Pope Benedict XVI): "If it's helpful in reminding people of the Virgin Mary's care and love for us, that's wonderful."

Some skeptics said the stain--which the Illinois Department of Transportation attributed to salt runoff--most resembled a chess pawn. Others saw only grime. To many, outright image worship smacks of idolatry. (Historically it became an issue of the iconoclastic crisis of 724-843 a.d. and the Protestant Reformation.) It remains an often emotional issue.

Indeed, on the night of May 5, 2005, a man used black shoe polish to write "Big Lie" over the stain. After a suspect was arrested, his niece said he had felt people venerating the stain were violating the second Commandment ("Thou shalt not make unto thee any graven image. . . ." [Exodus 20:4]), a prohibition against idolatry.

To obliterate the graffiti, state transportation workers covered the image with brown paint, but a nearby carwash's employees subsequently used a degreaser to remove most of the fresh paint and polish. Some of the zealous then proclaimed the salvaged image "another miracle."

Joe Nickell is Senior Research Fellow of the Committee for the Scientific Investigation of Claims of the Paranormal and writes the "Investigative Files" column for the organization's science magazine, Skeptical Inquirer. He is also author of numerous books, including Looking for a Miracle.

When Miracle Claims Tax the Spirit

The Truth Behind the Shroud of Turin

Fresh Claim that Shroud of Turin is Fake