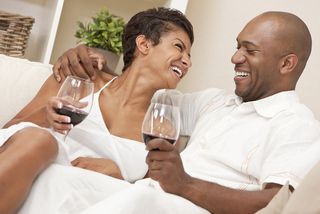 Marriage might help carry you into old age, researchers say. People who don't have a permanent partner or spouse during midlife are more likely to die during those years, a new study found.

Researchers analyzed data for 4,802 people who took part in the University of North Carolina Alumni Heart Study, which is an ongoing study of individuals born in the 1940s.

People who never married were more than twice as likely to die early than people who had been in a stable marriage throughout their adult life, the researchers found. Being single, or losing a partner, also reduced survival odds. The team controlled for variables like personality, socioeconomic status and risky behaviors.

"Our results suggest that attention to non-marital patterns of partnership is likely to become more important for these Baby Boomers," the researchers concluded. "These patterns appear to provide different levels of emotional and functional social support, which has been shown to be related to mortality."

Researchers involved in that review, published in the journal PLoS Medicine, speculated that our personal relationships provide our lives with meaning, help us deal with stress and might even encourage healthy behaviors.

The new research was detailed in the journal Annals of Behavioral Medicine.