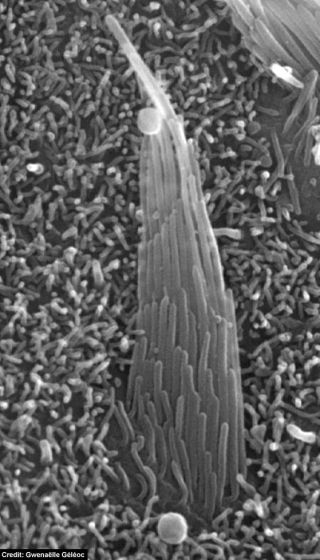 Scanning electron micrograph of a hair bundle from the inner of ear of a mouse when the TRPA1gene is turned on.

Scientists have figured out how trap doors and tunnels in your ears translate sound and movement into hearing and balance. The finding could one day help reverse genetic deafness and restore hearing lost by construction workers and concert-goers.

A protein from a gene called TRPA1 turns mechanical sound into electrical information for the brain, the study found.

"This could allow for the development of new gene therapies for deafness and balance disorders in the next five to ten years," said neuroscientist Jeffrey Holt of the University of Virginia, who led the research.

Here's how hearing works, Holt's team found: Inside the cell membrane of the hairs of the inner ear the protein forms a channel like a donut.

"When sound strikes the protein the hole pops open like a trap door, an electrical signal is generated which is relayed to the brain for interpretation," Holt explained.

Different structures are responsible for hearing and balance in the ear, but they both depend on the tiny hairs where the proteins reside to interpret stimulus. According to Holt the inner ear is a good candidate for gene therapy since it is isolated -- scientists would not have to introduce changes to the entire body.

The protein has both the donut structure and a spring portion that enables the hair cells to be "sensitive to movement as small as the diameter of a gold atom," Holt told LiveScience.

Cochlear amplification, the process that allows the ear to be sensitive to soft tones and specific frequencies, might also result from the TRPA1 protein. The amplification could result from the channels of the protein opening and closing in unison. It's like a child on a swing set, Holt said. When a child pumps her legs alone she go to a certain height, but when she pumps in concert with someone pushing her, she can go much higher.

Using mouse embryos as models, researchers were able to isolate the stage of development when the inner ear hairs were formed. That led to the isolation of the TRPA1 protein.

The discovery was detailed in the Oct. 13 online edition of the journal Nature.