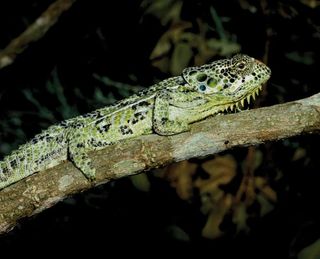 This species of chameleon, Calumma tsaratananensis, lives only in the summit region of Tsaratanana Massif, a mountainous region in Madagascar.
(Image: © Christopher Raxworthy)

Global warming is forcing 30 species of reptiles and amphibians to move uphill as habitats shift upward, but they may soon run out of room to run. The shift could cause at least two toad species and one species of gecko in Madagascar to go extinct by the end of this century, a biologist says. Uphill movement is a predicted response to increased temperatures, researcher Christopher Raxworthy of the American Museum of Natural History says. Earlier studies in Costa Rica have provided evidence of how tropical animals respond to climate change. The new research — based on surveys of Madagascar's amphibians and reptiles conducted in 1993 and 2003 and announced this week — extends that work, expanding the number and diversity of species that the trend affects, making a stronger link with meteorological changes, dealing with relatively large shifts in elevation, and assessing the extinction vulnerability for tropical communities in the mountains. Nowhere to run The animals that could go extinct are two species of narrow-mouth toads (Plethodontohyla tsarartananensis and Plethodontohyla sp. Z) and one species of gecko (Phelsuma l. punctulata) found in Madagascar’s mountainous north, Raxworthy said. Two of these species were not found again during the most recent 2003 survey. (And for the 30 species that were re-sampled between 1993 and 2003, the majority are already moving upslope to compensate for habitat loss at lower and warmer altitudes.) Extinction is expected to occur between 2050 and 2100 if current trends persist, because there will eventually be no higher ground, predict Raxworthy and his colleagues from the Université d’Antananarivo in Madagascar, National Chung-Hsing University in Taiwan, University of Michigan and University of Oxford. The prediction is based on a conservative scenario in which warming remains below 2 degrees C (3 degrees F). Warming above 2 degrees C is considered to be dangerous in terms of impacts on biodiversity. "Obviously, more warming will put more species at risk," Raxworthy told LiveScience. The results are detailed in a recent online issue of the journal Global Change Biology. "Two things together — highly localized distribution close to the very highest summits, and the magnitude of these upslope shifts in response to ongoing warming — make a poisonous cocktail for extinction," Raxworthy said. Almost-by-chance discovery Raxworthy discovered the uphill migration almost by chance while in the field. On repeated surveys of northern Madagascar’s mountains, the Tsaratanana Massif, he noticed that some species were missing from camps where they’d been previously observed. Moreover, some of these "missing" species popped up at the next higher elevation surveyed. "I noted this in the field as strange, but when I later sat down and looked at the data, the trend persisted," Raxworthy said. He culled elevation records and was able to compare surveys of animals over a 10-year period.

The results were dramatic. Among 30 species of geckos, skinks, chameleons and frogs, an average shift uphill of 62 to 167 feet (19 to 51 meters) was observed over the decade. When these results were compared with meteorological records and climate change simulations, the movement of animals could be linked to temperature increases of 0.18°F to 0.67°F (0.1°C to 0.37°C) over the same decade, which corresponds to an expected upslope movement of 59 to 243 feet (17 to 74 meters).

The results are strong because of the diversity of species included in the analyses, Raxworthy said.

"When you see a general trend across all these groups of organisms, it is likely to be related to a broad explanation like general temperature warming, not something more subtle such as seasonal variation," Raxworthy said.

Planning ahead The direct link between observed movement up mountains, possible extinction and climate change has consequences for Madagascar’s network of national parks. The government of Madagascar currently plans to set aside 10 percent of its landmass for conservation purposes, and earlier research this year by Raxworthy and colleagues used the distribution of 2,300 species of animals to map the areas of this island nation that provide adequate habitat for all species. "The Malagasy government is creating important new reserves and protecting forests. Sadly, however, with a phenomenon like global warming, species will move upslope, and so eventually may still lose all their habitat and go extinct," Raxworthy said. "This conservation problem thus requires a global solution." The research was supported by the National Science Foundation.