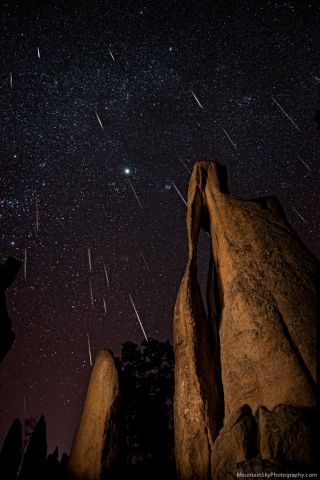 When skywatchers think of meteor showers during the month of December, they immediately think of the Geminids, which over the years have evolved into the most prolific and reliable of the dozen or so annual meteor displays that take place. And yet, there is also another notable meteor shower that occurs during December, which, in contrast, hardly gets much notice at all: the December Ursids.

This year, the peak of this meteor display is due during the morning hours of Saturday, Dec. 22.

The Ursids are so named because they appear to fan out from the vicinity of the bright orange star Kochab, in the constellation of Ursa Minor, the Little Bear. Kochab is the brighter of the two outer stars in the bowl of the Little Dipper (the other being Pherkad), that seem to march in a circle like sentries around Polaris, the North Star.

These meteors are sometimes called the Umids, in a rather unsuccessful attempt to make clear that their radiant is in Ursa Minor, not Ursa Major. [How Meteor Showers Work (Infographic)]

The fact that Kochab is positioned so near to the north pole of the sky means that it almost never sets for most viewers in the Northern Hemisphere. And since the Ursids seem to fan out from this particular region of the sky, you can look for these faint, medium-speed meteors all through the night if you care to.

The fact that the Ursids reach their peak on the night of Dec. 21 to Dec. 22 at first appears not to be good news, since the moon will be at a waxing gibbous phase, lighting up the night sky all through the evening hours and on into the first hours of Saturday morning.

However, the moon will set at around 2 a.m. Saturday, leaving the balance of the night with dark skies.  As British meteor expert Alastair McBeath notes in the 2012 Astronomical Calendar (edited by astronomer Guy Ottewell), "although the waxing gibbous moon does not set until roughly two a.m. on the 22nd, this return (of the Ursids) is not wholly unfavorable."

This is indeed a fortunate circumstance because the Ursids "badly need observing," according to the British Astronomical Association.

That observers have neglected the Ursids is not surprising. Everything about them is wintry.

They usually coincide with the winter solstice, and are best seen by polar bears since they come from near the celestial north pole. In contrast to the Geminids, which can produce up to 120 meteors per hour, the usual Ursid rate is but a fraction of that; generally speaking they produce about a dozen or so per hour at their peak.

The Ursids are actually the dusty debris shed by the periodic comet Tuttle 8P/Tuttle, which circles the sun in a 13.6-year orbit and was last seen in early 2008.

On occasion, Earth has interacted with a dense, narrow stream of particles shed by this comet, which has caused brief outbursts of Ursid meteors numbering in the dozens per hour, such as in 1945 and 1986. Counts reached 30 per hour in 2000 and during the years 2006 through 2008. But unfortunately no such interaction is expected this year.

Still, you never know — meteor showers have surprised us before, so it's always worth taking a look.

Editor's Note: If you snap a nice photo of the Ursids or any other night sky target and would like to share it with SPACE.com for a possible story or gallery, please send the photo and comments to spacephotos@space.com.