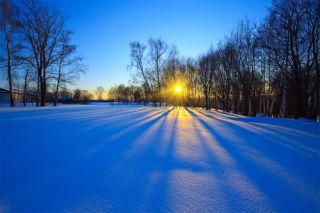 The winter solstice marks the shortest day of the year, when the sun is at its lowest point in the sky in the Northern Hemisphere.
(Image: © Stockxpert.)

In the very likely event that we survive Friday's rumored Mayan apocalypse, those of us in the Northern Hemisphere will at least get to experience another cosmic occasion: the winter solstice.

On Friday, Dec. 21, the sun will appear to make its lowest, quickest trek across the sky all year, resulting in the shortest day of 2012 and the official start of winter.

Earth is tilted on its axis 23.5 degrees, so it leans one way as it spins around its axis while orbiting the sun. On Dec. 21, the top half of the planet (everything north of the equator) will face away from the sun, leaving the North Pole in complete darkness.

Since the summer solstice on June 20, 2012, the altitude of the midday sun (or its height above the horizon) has been getting lower as its direct rays have been gradually migrating to the south. Technically, after the exact moment the winter solstice occurs Friday — 6:12 a.m. EST (1112 GMT) — the sun will turn around and start on its journey back north. So starting Saturday, the days will slowly start getting longer, but that doesn't mean it will start getting warmer. In fact, the coldest days are yet to come.

Daylight in the mid-latitudes lasts for around nine hours close to the winter solstice, compared with about 15 hours around the summer solstice (when the Northern Hemisphere is tilted toward the sun). With less sunlight energy hitting us, temperatures plummet. And even though the days will get longer during January, Northern Hemisphere oceans continue to cool in the relative lack of the sun's rays, and ocean temperatures drive much of the weather on the continents.

Our trek around the sun does more than choose our daylight hours, it has been the basis of calendars as far back as the fourth century B.C. People in the Americas even built solar observatories of stone to mark the solstices and other times that were critical for planting or harvesting crops. Shrines and even tombs were also designed with the sun in mind.