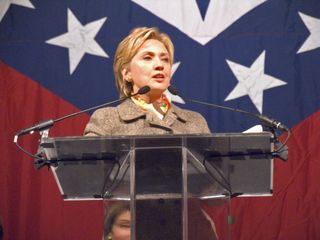 People prefer deeper voiced ladies, such as Hillary Clinton, for leadership positions, even when those positions are stereotypically held by women.
(Image: © spirit of america | Shutterstock)

Both women and men prefer female leaders who have lower-pitched voices to ones with higher voices, even in stereotypically female positions, according to a new study.

When given a choice between a hypothetical high-pitched or low-pitched candidate for parent teacher organization president or school board member, people more frequently chose the lower-pitched voice, according to the research detailed online this week in the journal PLoS One.

The researchers used hypothetical candidates and thus couldn't say how much real candidates are judged by voice, but the results suggest voice pitch may be one of the factors people use to judge candidates, said co-author Casey Klofstad, a political scientist at the University of Miami.

"Our physiology determines our voice pitch," Klofstad said. "It's interesting that your physiology, a characteristic that may or may not be related to your leadership ability, is helping you to obtain a leadership position."

In general, people use voice pitch as a cue for personal traits, Klofstad told LiveScience. Women with high voices are seen as more sexually attractive, while men with low voices are perceived as strong, attractive and socially dominant, he said. Taking that idea a step further, a woman with a deeper voice may be assumed to have more masculine traits, such as dominance and power. [6 Gender Myths Busted]

In a study published earlier this year, Klofstad and his team found that both women and men prefer deep-voiced candidates for political office. But they wondered whether that preference would hold for positions seen as more stereotypically feminine: president of a parent teacher organization, like the PTA, and school board member.

"Positions of leadership where the leader is involved in the care and welfare of families and children, those are predominantly held by women," Klofstad told LiveScience.

To find out, Klofstad and his colleagues asked a group of 71 college students to vote for a preferred choice for school board from 10 pairs of female and 10 pairs of male candidates, based just on hearing their voices say, "I urge you to vote for me this November.” (For each pair, voters had to decide between two versions of an identical voice, in which the same voice was manipulated to be higher or lower pitch).

The same protocol was then used to pick candidates for President of the parent teacher organization.

Roughly three-quarters of the time, both men and women preferred the female candidate with the deeper voice. About 60 percent of the time, men preferred other men with manlier voices, while women showed no preference for voice pitch in men.

The results suggest that even for positions of power traditionally held by women, people tend to prefer women with more masculine, lower-pitched voices. Anecdotally, women such as Secretary of State Hillary Clinton and House Minority Leader Nancy Pelosi have slightly deeper voices, and former British Prime Minister Margaret Thatcher actually got voice coaching at the beginning of her career to avoid being perceived as "shrill and screechy," Klofstad said.

As a follow-up, Klofstad and his colleagues want to see if this preference for deep-voiced female candidates plays out in the real world.

If so, then politicians would do well to go through vocal training before campaigning, he said.