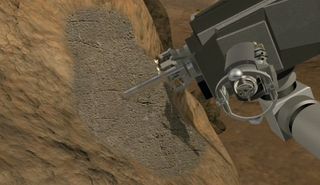 Was Ancient Mars A Wetter Place? Curiosity Will Look For The Evidence
(Image: © Rod Pyle / Space.com)

As NASA's Mars rover Curiosity prepares to use its rock-boring drill for the first time, engineers are troubleshooting an issue with the power tool that may affect the entire mission.

Curiosity's fast-spinning percussive drill should make it through the originally planned two-year prime mission, team members say. But at some point a bond in the drilling mechanism will fail, causing an electrical short that could threaten to knock out the entire rover.

"Unless you do something about it, all hell breaks loose electronically, because it takes our power bus and rattles it around," Curiosity chief engineer Rob Manning, of NASA's Jet Propulsion Laboratory in Pasadena, Calif., told SPACE.com in a video interview. "It's almost like the drill grabs the rover and shakes the whole thing electronically."

By the time the Curiosity team noticed the issue, it was too late in the planning of the mission to rework the drill and correct it, Manning said. But engineers were able to install a potential safety net just a month or two before the rover blasted off from Florida's Cape Canaveral Air Force Station in November 2011. [Video: Curiosity's Drill Will Break]

They bolted in an additional set of wires that could be used to keep Curiosity's power bus safe, by shorting it temporarily in advance of any big drill problems.

"So if this short happens on the spacecraft, it doesn't rattle around everybody," Manning said. "We've been testing all that — to see what's going on, to make sure it all works properly."

The $2.5 billion Curiosity rover landed inside Mars' huge Gale Crater on Aug. 5, kicking off a mission to determine if the Red Planet could ever have hosted microbial life. The percussive drill is a key part of this quest, allowing the six-wheeled robot to bore 1 inch (2.5 centimeters) into Martian rocks — deeper than any rover has been able to go before.

Curiosity has not used its drill on the Red Planet yet, but that should change soon. The mission team is currently looking for rocks that would make a suitable target for its first drilling operation, which scientists hope to complete before the Christmas holidays.

While the drill should last at least two years on Mars, Curiosity may be able to keep chugging around the Red Planet for far longer than that. The car-size rover's nuclear power source, for example, should be good for at least a decade, and perhaps much longer.

And NASA will keep funding Curiosity as long as possible. Last week, the agency announced that it would continue to operate Curiosity and its other Mars spacecraft as long as they're scientifically viable.