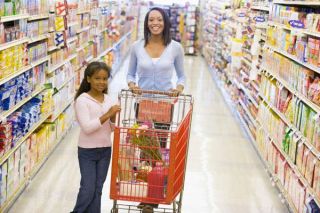 As Americans fill their pantries and select turkeys in preparation for Thanksgiving, the holiday feasting brings huge amounts of food into urban areas. But where does that food come from?

Even after this year's widespread drought, one place without "made in China" labels is the grocery store. The United States takes care of its own food needs.

"Even in a drought year, such as this year, the U.S. produces enough corn to meet domestic needs and export over 1 billion bushels," Hart said. "We are also self-sufficient in sorghum, rice, soybeans, eggs, dairy, pork, chicken and turkey meat. And depending on the year, the U.S. is sometimes self-sufficient in beef. Some years we are a net importer of beef, some years we are a net exporter."

Some products, like bananas and coffee, can't be grown commercially in the temperate climes of the contiguous 48 states of the United States, and these must be imported.

In terms of grains, however, oats are an exception. The United States grows as well as imports this feed grain.

"The 2012 drought will have a relatively small impact on prices this Thanksgiving," said Hart. "Many of the traditional items such as cranberries, white potatoes, and sweet potatoes have had good harvests. The biggest potential impact is on turkey prices, though it looks like retailers locked in prices before the drought...I anticipate that turkey prices will be higher for the 2013 Thanksgiving because of the drought that has increased feed prices to near record levels."

Despite the drought, Americans have much to be thankful for this holidays season.

"Thanksgiving is the perfect time to think about the high quality food system we have in the U.S.," said Ruth MacDonald, professor and chair of food science and human nutrition at Iowa State University. "Although it is not perfect and there are people that have inadequate access to high quality food, we have systems to help."

The majority of Americans spend only a small fraction of their income on food compared to other countries, she says.

Breaking it down, here are the origins of a typical Thanksgiving dinner: Turkey: "We import a little turkey, but export a lot more," said Hart. "So net, we are self-sufficient in turkey. The U.S. is actually the world leader in turkey exports." According to USDA figures provided by the National Turkey Federation, the top turkey producing states are Minnesota, North Carolina, and Arkansas. In 2011, 248 millions turkeys were reared in the U.S. and approximately $600 million worth were exported. Cranberries: Cranberry consumption in the United States is on the rise and outstripping in-country production. Wisconsin is America's top cranberry producer, followed by Massachusetts, according to the USDA's National Agricultural Statistics Service. Canada is another major source of America's cranberries. "We do import a lot of cranberries," said Hart. For mercantilists who want to stand against the red menace of foreign cranberries, the fruits can be grown in the backyards of northern states. The University of Wisconsin -- Madison's Ask Cranberry service provided these links: Cranberry Creations A guide from the University of Maine A guide from the University of Massachusetts Want that can-shaped look? Do it yourself: Food in Jars -- Tin Can Mold Sweet Potatoes: Sweet potato production is centered in the southern United States, namely, North Carolina, Mississippi, and Louisiana. In 2010, according to the USDA's Economic Research Service. U.S. sweet potato crop totaled a record 1,190 tons and was valued at a record $478.3 million, up 12.9 percent from 2009. Consumption per person that year was 6.3 pounds, also up from 2009. Long before North American natives shared food with the Pilgrims, other indigenous people may have shared the sweet potato with explorers arriving on the opposite side of the Western Hemisphere. The presence of sweet potatoes on Polynesian islands has been suggested as evidence of trans-Pacific trade between Polynesian explorers and the Pre-Columbian peoples of South America. Yeast species and chickens have also been noted as possible evidence of contact. ANALYIS: Hitchhiking Adventures of Pre-Columbian Yeast Pumpkin: Great pumpkins rose in America's top producing patches in Illinois (520.4 million pounds), California (168.2 million pounds) and New York (69.3 million pounds), according to the USDA's 2011 figures. A strong harvest in 2012 was expected to drop prices, but a rise in demand picked the the slack and moved prices back to 2011 levels. Sugar: Families don't sit around a big bag of holiday sugar, but the sweetener goes into a wide variety of holiday dishes. "Over the last three to four years, the U.S. has produced roughly 75 percent of its own sugar needs," said Hart. ANALYSIS: Sugarcane Cools Climate, Heats Up Tax Debate More information about the food supply in different regions of the United States can be visualized using the maps of the U.S. Department of Agriculture's (USDA) Food Environment Atlas.