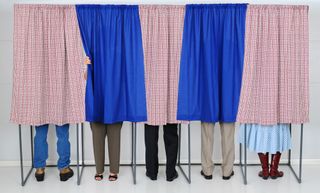 The majority of people who vote for president Tuesday will never know who their co-workers voted for, a new study finds.

Research from CareerBuilder revealed that 66 percent of employees don't share their political affiliation at work, with nearly 30 percent believing they need to keep their party ties a secret around the office.

"For the most part, people want to avoid controversy in the office as much as possible," said Rosemary Haefner, vice president of human resources at CareerBuilder. "Avoiding discussions of politics may be one way they can do that."

The majority of workers who keep their party affiliation a secret do so because they feel politics shouldn't be discussed in the office unless it affects their job, with 13 percent keeping quiet because they think their co-workers support the opposing party.

Regardless of their affiliation, most employees are keeping their election paraphernalia outside of the workplace. The study found that 98 percent of workers don’t have U.S. Presidential campaign items or decorations on display in their office.

Despite their best efforts, Haefner said employees are bound to find themselves in a political discussion on election day and when they do they should:

The research was based on surveys of more than 4,100 workers over the age of 18.