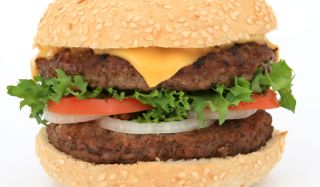 Additionally, the results showed that kids consumed more sugar, total fat, saturated fat and sodium when they ate at restaurants, the study showed.

"In particular, for example, fast-food consumption among adolescents increased sugar, total fat, saturated fat and sodium intake by approximately 13 percent, 22 percent, 25 percent and 17 percent of the daily reference levels of these respective nutrients," the researchers wrote in their study published today (Nov. 5) in the journal Archives of Pediatrics & Adolescent Medicine.

Studies have shown that obesity rates and fast-food consumption have risen in parallel over recent decades, but the new research differed because it looked at fast-food as well as full-service restaurants, according to the study.

In the new study, researchers at the University of Illinois at Chicago used the results of national health surveys conducted by the Centers for Disease Control and Prevention between 2003 and 2008. They included data from 4,700 children between ages 2 and 11, and 4,700 teens between 12 and 19. Participants (or their parents) reported, on two separate days, all food and beverages they'd consumed in the previous 24 hours.

Children are increasingly eating meals away from home, the researchers said. Studies have shown that between the late 1970s and the mid-2000s, the percentage of their total calories that kids get at restaurants has risen. Other work shows that the percentage of teens who eat at fast-food restaurants three or more times a week has also increased in recent years.