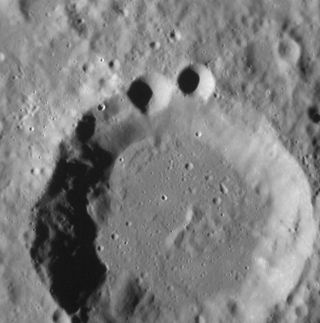 It turns out, 'C' is for crater, and not just cookie.

An impact basin spotted on Mercury with two smaller craters above it looks remarkably like the sweet treat-loving Cookie Monster muppet of "Sesame Street" fame — at least to the eyes of scientists working on NASA's Messenger mission to the small planet.

The researchers posted a photo of the crater arrangement with the title "Anyone Else Think This Looks Like the Cookie Monster?" on the Flickr page of NASA's Goddard Space Flight Center in Greenbelt, Md., today (Oct. 12). The charming crater is a giant circle created when a space rock impacted planet Mercury long ago. Two smaller craters dot the upper edge of the main impact site, and were created when lesser asteroids smashed into the planet after the larger strike.

When the Messenger probe took the photo, shadows on the two smaller craters fell perfectly to create the effect of "googly eyes" on top of a round head, just like the blue puppet who is overly fond of baked goods on the beloved children's public television series.

"The superposition of younger craters on older craters (in this case two smaller craters upon the rim of an older crater) can result in landforms that appear to resemble more familiar shapes to human eyes," the scientists wrote. "More generally, the Law of Superposition allows scientists to determine which surface features pre- and postdate others, leading to a better understanding of the geological history of different regions of Mercury's surface."

Cookie Monster is not the first cute crater seen on Mercury. A Messenger photo taken in June showed a trio of craters with an uncanny likeness to Mickey Mouse.

The Messenger probe (short for Mercury Surface, Space Environment, Geochemistry and Ranging) launched in 2004 and became the first spacecraft to enter orbit around Mercury in March 2011. The $446 million mission was originally intended to spend about a year mapping Mercury, but was granted a one-year extension.