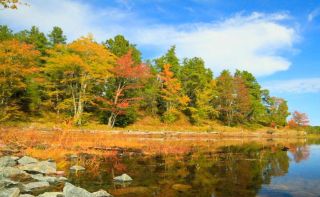 Fall has come to Michigan's Upper Peninsula, bringing its bright colors and beautiful scenery — and film student Mike Kvackay was there to take a time-lapse video of nature in all its splendor.  He even got a bonus cameo from the Northern Lights.

Although Kvackay, 21, hails from Chicago, he decided to enroll in cinematography at Northern Michigan University due in part to his love of the Upper Peninsula's natural beauty. Driven by his passion for photography and nature, he taught himself how to make time-lapse videos, which involve taking thousands of pictures and stitching them together into a movie. In the beginning, it wasn't easy, Kvackay said. [Watch the time-lapse video.]

"For the first couple months, they didn't turn out," Kvackay told OurAmazingPlanet. "But after a lot of work and a lot of time, I got it down pretty well."

The video took him three weeks to shoot and shows some of his favorite locations in the Upper Peninsula, such as Lake of the Clouds in the Porcupine Mountains. The area is home to a large stand of old-growth, northern hardwood forest and a wide array of wildlife, including black bears.

The video shows off the area's bright yellow and red foliage, including the colors from maple, birch and oak trees.Kvackay got lucky with a particularly striking showing of the Northern Lights, which locals tell him was the brightest they've ever seen the aurora borealis appear.

"I really want people to see the beauty of the UP," Kvackay said. "Not many people see nature at its greatest."