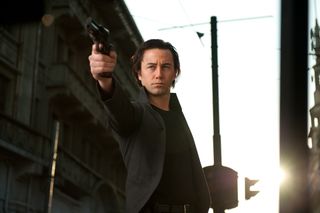 Time travel is a staple of science fiction, with the latest rendition showing up in the film "Looper." And it turns out jumps through time are possible, according to the laws of physics, though traveling into the future looks to be much more feasible than traveling into the past.

"Looper" stars Joseph Gordon-Levitt as Joe, an assassin who kills targets sent back in time by the mob. Things get complicated when Joe is assigned to kill his future self, played by Bruce Willis. The movie, produced by TriStar Pictures, opens today (Sept. 28).

In this imagining, time travel has been put to nefarious uses by people operating outside the law. But could such a thing ever happen in real life? [Gallery: Time Travel in "Looper"]

"It's actually consistent with the laws of physics to change the rate at which clocks run," said Edward Farhi, director of the Center for Theoretical Physics at MIT. "There's no question that you can skip into the future."

However, Farhi told LiveScience, "most physicists think you can go forward, but coming back is much more problematic."

The roots of time travel stem from Einstein's theory of relativity, which revealed how the passage of time is relative, depending on how fast you are traveling. The faster you go, the more time seems to slow down, so that a person traveling on a very fast starship, for example, would experience a journey in two weeks that seemed to take 20 years to people left behind on Earth.

In this way, a person who wanted to travel to a period in the future need only board a fast enough vehicle to kill some time.

"That was a huge thing when Einstein realized the flow of time was not a constant thing," Farhi said.

However, this kind of manipulation only affects the rate at which time moves forward. No matter your speed, time will still progress toward the future, leaving scientists struggling to predict how one might travel to the past.

Some outlandish solutions to Einstein's equations do suggest that traveling backward in time might be possible, but to do so could require about half the mass of the universe in energy, and would likely destroy the universe in the process.

And even if science presented a method for backward time travel, there are troubling paradoxes involved.

"If you could go back in time, you could prevent your parents from getting together and making you," Farhi said. "I think some people might say it ends there." [Video - Looper Time-Travel]

"I don't know of a definitive theorem that says it absolutely cannot happen, other than it leads to logical paradoxes and it can also cause the entire universe to collapse," Farhi said.