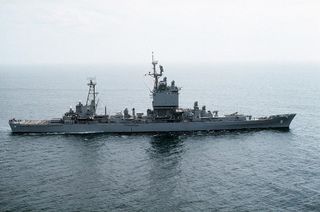 The U.S. Navy's first nuclear-powered surface warship made its maiden voyage around the world without stopping once to refuel. But the USS Long Beach, a guided-missile cruiser, has finally received a junkyard sentence almost 50 years since it set sail.

Many Navy ships end up as gunnery practice targets, get sold to allies, or end up sunk on the bottom of the ocean as artificial reefs, according to the Washington Post. But nuclear-powered ships tend to end up as scrap after the removal of radioactive elements.

The USS Long Beach has a proud history that included combat against North Vietnamese fighter jets during the 1960s and 1970s, as well as setting the record of shooting down the first enemy aircraft with a surface-to-air missile. It also helped pave the way for the modern nuclear Navy — nuclear reactors still power Navy warships such as aircraft carriers and submarines.

All of that will only live on in the records and photographs once the ship becomes the scrap equivalent of 7.35 million pounds of steel, aluminum and copper wiring.